Risk on or is Risk off, that’s the question?

The dollar continued its rally today sending emerging markets and commodity prices spiralling lower.  As we have highlighted in previous days volatility is the only constant in this market. The market was brought to life this morning by the US indicating that they will ease sanctions against Rusal (the second largest aluminium producer) if the oligarch Oleg Deripaska relinquished control. Commodity prices were softer with Aluminium tumbling 8% at this announcement. We anticipate more speedhumps this week as President Trump has talks with President Macron of France and Chancellor Angela Merkel of Germany. Companies reporting on the S&P this week constitute 42% of the total market capitalization of the index and hence can have a major bearing on the index.

The local market opened the day firmer with rand hedges leading the way as the dollar advanced against most major currencies. British American Tobacco[JSE:BTI],  Mondi [JSE: MND] , Reinet [JSE: RNI]  and  Richemont [JSE: CFR] advanced 2.36%, 1.63%, 0.2% and 0.92%. The Rand hedges have been on the back foot for the last four months showed signs of life today as the Rand broke through the key support of R12.20 to the dollar. Further weakness in the local unit could see the rand hedges advancing even further. Old mutual [JSE:OML],  continued its rally on Monday as the insurer gave more details surrounding the impending managed separation.  The share price has rallied as more details of this break up have been availed to the market, the share price of OML continues to trade at a discount to its major peer Sanlam [JSE:SLM] and to the sum of the parts valuation of the business. At the close of business today OML was trading at 4280c up 3.88% eclipsing the March high.

Tradehold[JSE: TDH] found itself on the green end of the market today erasing the losses sustained on Friday to close up 10.7%. Other names to make positive ground on the day were Royal Bafokeng Platinum [JSE: RBP], Assore [JSE: ASR] and Kumba Iron ore [JSE: KIO] adding 5.64%, 4.5% and 4.19% respectively. Steinhoff International [JSE:SNH] was on the back foot again on Monday shedding 15.33%,  the market continues to digest the minutes from Friday the 20th AGM.  The losses on the day were not limited to the embattled retailer but were seen across some of the SA Inc shares.  Losses were recorded in Brimstone [JSE:BRN], the dually listed Trustco holdings [JSE:TTO] Stadio [JSE:SDO] and South32[JSE:S32]down 10.42%, 6.43%, 6.12% and 6.01% respectively. 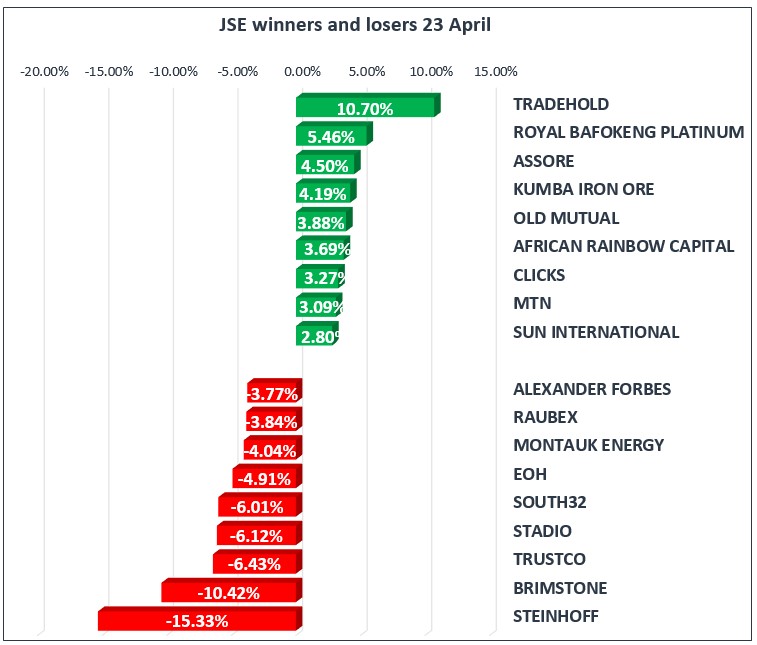 The Rand was softer today and was trading at R12.28/ $ at 17:00 CAT. The local unit lost ground against the greenback mainly due to a rebound in the USD today. South African 10-year bond (R186) yields were higher today and were bid at 8.16% up from 8.04% on Friday.  The focus now is on US 10year yields that are slowly creeping to the psychological 3% mark. The major worry for economist is that if interest rates continue to rise, we could see an inverted yield curve as short-term rates go above long-term rates. The 10-2year treasury spread in the us is now at 0.48% down from 1.2% at the beginning of 2017.

Bullion was weaker on the day as investors sought safety in the dollar. The precious metal made a session low of $1322/Oz having traded at $1334/Oz earlier in the session. At the time of writing Gold was trading at $1324/Oz.

Brent Crude was not spared by the ragging dollar as a barrel was changing hands at $73.09/ barrel at 17:00 CAT lower from Fridays closing levels.