Risk on as global markets and local miners rally

Tech giant, Alphabet, reported earnings which beat earnings estimates which saw the stock rise in after-market trading in the USA overnight. At the US open on Tuesday, the Nasdaq powered to a new all-time high as investors piled into the tech-heavy index. 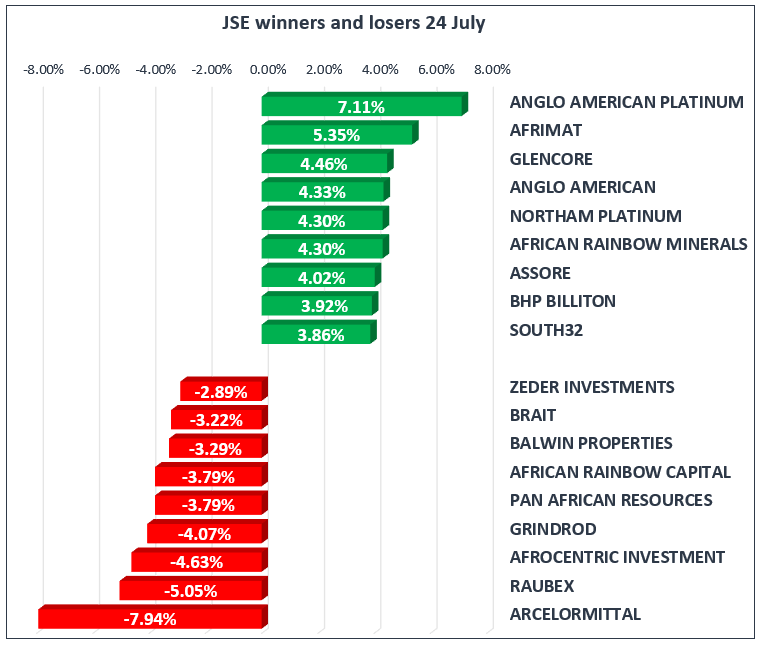 Losses were fairly modest on the blue-chip index were Vodacom [JSE:VOD] retraced for a second consecutive session to close at R125.51 after shedding 2.6%. Rand hedge, Richemont, [JSE:CFR] eased to R115.27 after dropping 1.88%, while Woolworths [JSE:WHL] slowed to R51.90 after shedding 1.8%.

The local bourse managed to gain momentum and close significantly firmer, which saw the JSE All-Share index climb 0.88% and the JSE Top-40 index gain 1.01%. The Resources index benefitted the most as it rose 2.64%, while the Financials and Industrials indices added 1.22% and 0.12% respectively.

The rand strengthened to a session high of R13.28 against the greenback following the news of a significant investment into South Africa by China. The rand was trading 1.14% firmer at 17.00 CAT to be recorded at R13.29/$.

Brent crude advanced in today’s session as investors were anticipating a draw in US stockpiles data. The commodity was trading 0.79% firmer at $73.64/barrel just after the JSE close.