The JSE closed softer on Tuesday as a broad-based selloff saw most global equity markets retreat in Tuesday.

Although modest, the local bourse gave back some of the gains from the prior session as all the major indices traded softer. Earlier in Asian markets trading the Shanghai Composite Index only shed 0.09% while the Hang Seng lost 0.23%. The Japanese Nikkei managed to post gains of 0.55%. In Europe, the trend was mostly lower on the day with all the major indices trading softer on the day.

On the JSE, Shoprite [JSE:SHP] came under pressure following the release of its full-year results, which despite some positives from the South African market showed significant losses from its non-SA business. The stock fell to end the day 9.25% lower at R126.86. The pressure on Steinhoff International [JSE:SNH] continues to mount as it hit a new all-time low of R0.87 in today’s session before closing 5.05% weaker at R0.94. Other retailers also struggled on the day with losses being recorded for Pick n Pay [JSE:PIK] which lost 5.71% to close at R56.84, Woolworths [JSE:WHL] which dropped 3.41% to close at R52.10, and Truworths [JSE:TRU] which closed at R51.90 after falling 3.03%. BHP Group [JSE:BHP] came under pressure despite releasing a relatively solid set of full-year financial results. The miner eventually closed 2.66% lower at R323.32. 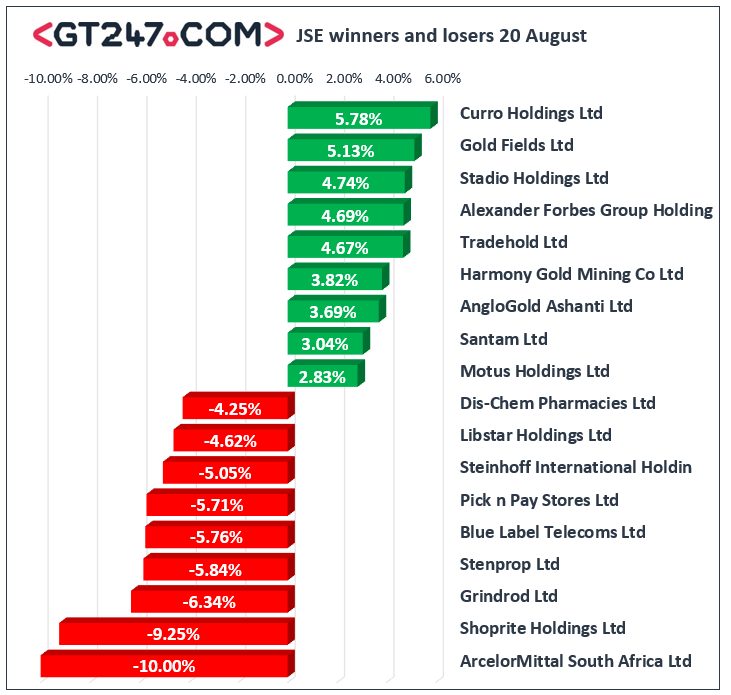 Brent crude traded mostly softer as it was recorded trading 0.87% weaker at $59.24/barrel just after the JSE close.