Retailers and financials get a lift from the firmer rand

The JSE closed firmer on Thursday led by retailers and financials which rebounded on the back of the firmer rand.

The rand strengthened along with other emerging market currencies due to the weaker US dollar which began its retreat overnight. The local currency managed to strengthen to a session high of R15.23 against the greenback before retreating to trade 0.44% firmer at R15.36/$. 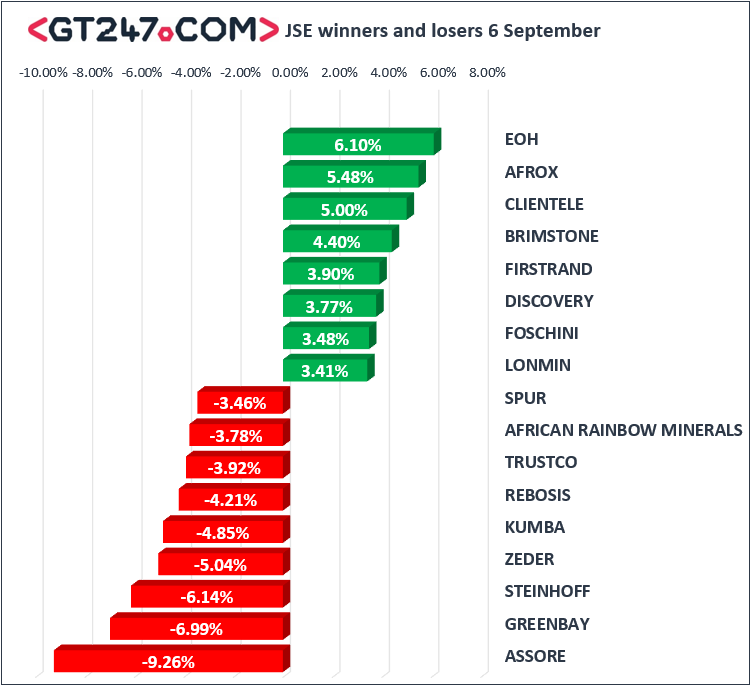 EOH Holdings [JSE:EOH] broke its downward trend as it jumped 6.1% to close at R36.55 per share. This was after the firm issued a trading statement indicating that they are expecting revenue to increase by approximately 8% for the full-year ended 31 July. Platinum miner, Lonmin [JSE:LON] added 3.41% to close at R8.49 per share.

Assore [JSE:ASR] retreated in today’s session following the big rally that was recorded yesterday. This was despite an impressive set of full-year results in which the firm reported record attributable earnings and a record annual dividend of R22 per share. The stock eventually closed the day down 9.26% at R310.32 per share. Greenbay Properties [JSE:GRP] weakened to R1.33 after dropping 6.99%, whilst Spur Corporation [JSE:SUR] closed 3.46% weaker at R26.25 per share after reporting a decrease in profit and earnings in its full-year results.

The JSE All-Share index held on to its gains to close 0.05% firmer, while the blue-chip JSE Top-40 index gained 0.12%. The Financials index broke its recent downward spiral to end the day up 1.69%. The Industrials index was flat barely gaining 0.01% while the Resources lost 1.05%.

Despite opening weaker, brent crude slowly advanced as the market anticipated this week’s US crude inventories data. It was trading 0.19% firmer at $77.42/barrel just after the JSE close.