The local bourse shrugged the trend in other global stocks as it closed firmer on Tuesday primarily on the back of gains in the resources sector.

With Chinese markets closed for a holiday, there was little sentiment filtering from that market. In Japan, the Nikkei eventually closed 0.59% firmer. Stocks in Europe were dragged lower by a flurry of weaker than expected manufacturing PMI from most of the bloc’s members. This reignited fear of a global slowing economy which was worsened by a reading of US manufacturing PMI data which printed its lowest level since the financial crisis of 2008.

There was bad news in terms of local economic data via the release of the ABSA Manufacturing PMI reading for September which fell to 41.6 from a prior recording of 45.7. This was also worse than the forecast of 43. The rand slumped further in today’s session as it fell to a session low of R15.35 before it was recorded trading 1.38% weaker at R15.34/$ at 17.00 CAT. 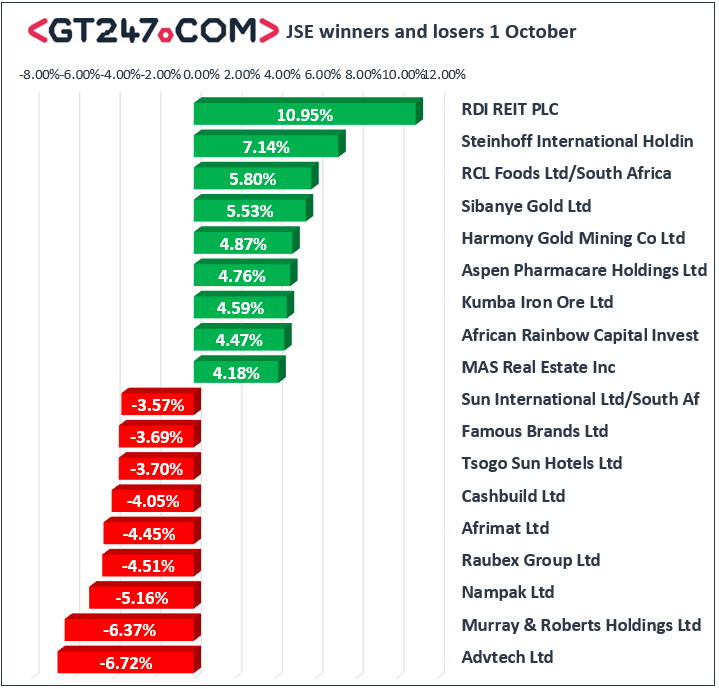 The JSE All-Share index eventually closed 0.26% firmer while the blue-chip JSE Top-40 index also managed to add 0.26%. The Resources index recorded significant gains of 1.11% while the Financials index was unchanged on the day. The Industrials index shed 0.11%.

Brent crude was marginally firmer as it was recorded trading 0.62% firmer at $59.63/barrel just after the JSE close.