The JSE managed to close firmer on Friday despite earlier declines as it surged on the back of gains in the resources index.

The rand strengthened against the greenback as it peaked at a session high of R14.59/$. However, the local unit relinquished most of these gains as it was recorded trading 0.04% firmer at R14.67/$ at 17.00 CAT. 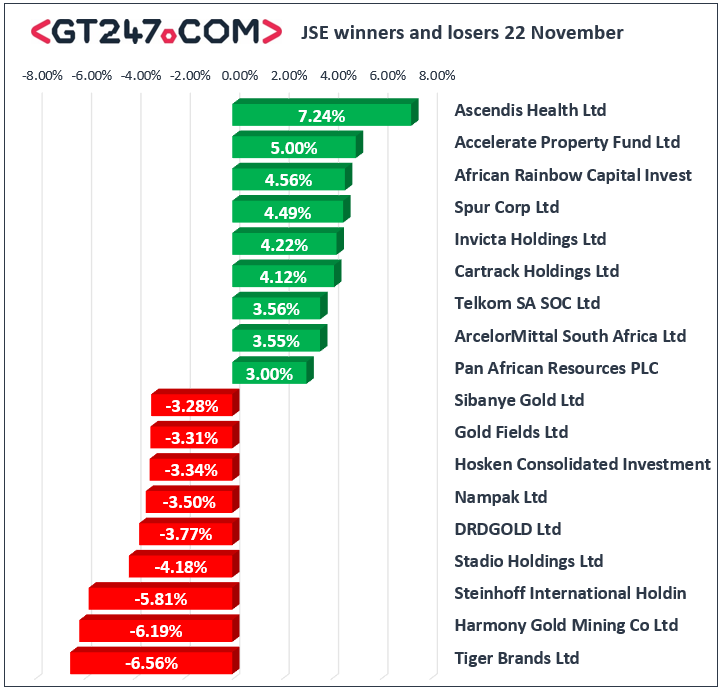 Tharisa PLC [JSE:THA] came under pressure following the release of its full-year trading statement which showed significant declines in earnings. The stock lost 21.91% to close at R15.22. Tiger Brands [JSE:TBS] reported lower headline earnings in its full-year results which saw the stock fall 6.56% to close at R216.99. Gold miners also struggled on the day as losses were recorded for Harmony Gold [JSE:HAR] which lost 6.19% to close at R46.97, while Gold Fields [JSE:GFI] dropped 3.31% to end the day at R77.68. Retailers came under pressure with declines being recorded for Massmart [JSE:MSM] which fell 2.07% to close at R44.01, Pick n Pay [JSE:PIK] which lost 1.5% to close at R68.78, and Mr Price [JSE:MRP] closed at R179.74 after losing 2.05%.

The JSE All-Share index eventually closed 0.14% firmer while the JSE Top-40 index added 0.5%. The Resources index recorded most of the day’s gains as it closed 1.49% higher. The Industrials and Financials indices lost 0.1% and 0.62% respectively.

Brent crude surged above $64/barrel in today’s session before it was recorded trading 0.14% firmer at $64.06/barrel just after the JSE close.