Resources lead gains on the JSE

A resource led rally saw the JSE close firmer on Monday amidst a global market which was struggling to digest developments with Brexit.

The UK parliament is scheduled to meet to consider the Brexit agreement that prime minister Boris Johnson reached with the EU. Although slightly optimistic, investors remain cautious of any potential negative implications of the deal.

US corporate earnings remain in focus with expectations of better than forecasted earnings for most blue-chips. As a result, US major indices could potentially retest their recent all-time highs negating any news from the current trade tensions between the USA and China.

On the currency market, the rand held on to its gains as it peaked at a session high of R14.73/$. The US dollar continued against most of the major currencies as the sterling pound advanced. The rand was trading 0.1% firmer at R14.76/$ at 17.00 CAT.

On the local bourse, Capital & Counties [JSE:CCO] was among the day’s biggest gainers after it advanced 8.74% to close at R51.50, following the publication of a response to the possibility of a cash offer for the company from a potential suitor. Intu Properties [JSE:ITU] was buoyed by the positive sentiment surrounding Brexit which saw the stock rise 7.14% to close at R9.60. Miners traded mostly firmer on the day which saw gains being recorded for Pan African Resources [JSE:PAN] which gained 4.88% to close at R2.15, Exxaro Resources [JSE:EXX] which climbed 4.3% to close at R124.76, and diversified mining giant Anglo American PLC [JSE:AGL] which closed 3.08% higher at R373.57. Aspen Pharmacare [JSE:APN] managed to record gains of 3.21% to close at R105.69, while rand hedge Mondi PLC [JSE:MNP] closed 2.98% higher at R301.48. 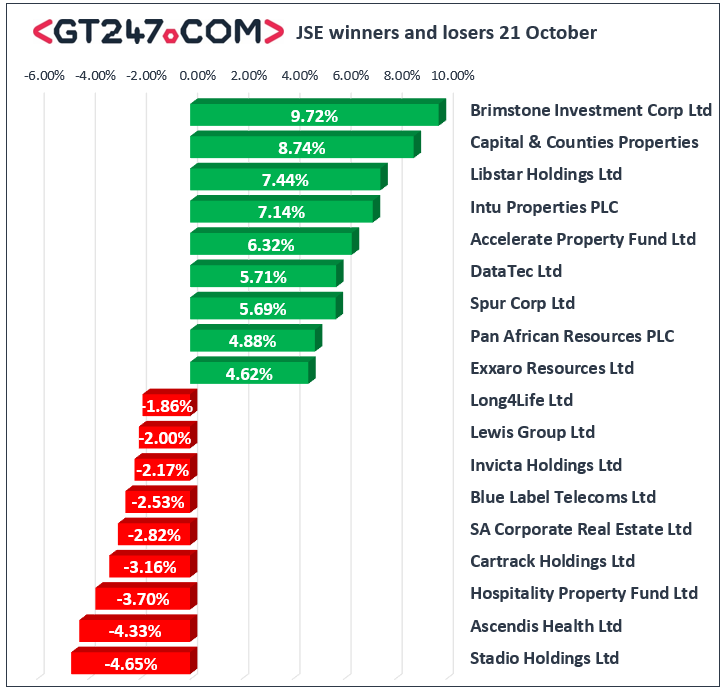 The JSE All-Share index eventually closed 0.71% firmer while the JSE Top-40 index gained 0.67%. The Resources index rallied to close 1.4% higher, while the Industrials and Financials indices gained 0.17% and 0.95% respectively.

Brent crude weakened over concerns of oversupply due to a slowing global economy. The commodity was trading 1.16% weaker at $58.73/barrel just after the JSE close.