The JSE closed softer on Thursday as financials retreated on the back of a weaker rand.

The move in the rand was indirectly a result of the euro weakening ahead of the European Central Bank’s interest rate decision and press conference which took place on Thursday afternoon. The ECB left the main refinancing rate unchanged at 0.00%, however with the weak economic data that has been recorded from most major European economic powerhouses over the past month the central was expected to take a more dovish stance on monetary policy.

The euro which has been on the backfoot against major currencies this week, fell to a two-year low as the ECB president signaled that future interest rate cuts were in the pipeline despite holding back for now. The US dollar advanced as a result, which saw most emerging market currencies track lower against the greenback. The rand was not spared as it tumbled to a session low of R14.08/$ before it was recorded trading 1.17% weaker at R14.03/$ at 17.00 CAT.

The JSE opened softer and continued to trade weaker for the entirety of today’s session. Oil and gas producer Sasol [JSE:SOL] fell following the release of trading statement in which it indicated that it is expecting lower earnings per share for its full financial year. The company also flagged the increase in the capital cost of the Lake Charles Chemical Project as significant impairment to its profitability. The stock eventually closed at R308.00 after falling 6.37%. 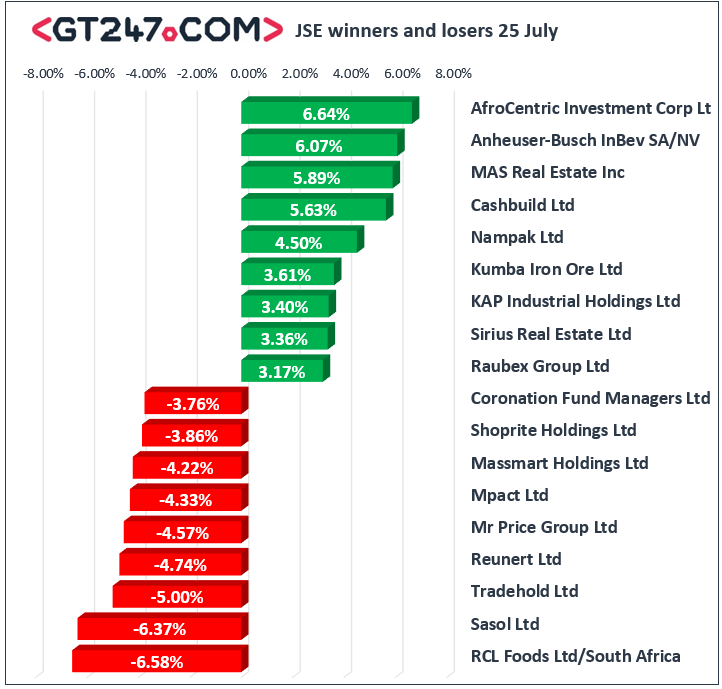 The JSE Top-40 index eventually closed 0.12% weaker while the JSE All-Share index shed 0.3%. The Financials was the biggest loser amongst the major indices as it fell 1.26%. The Industrials and Resources indices dropped 0.16% and 0.03% respectively.

After tumbling overnight, brent crude resurged in today’s session and it was eventually recorded trading 1.01% higher at $63.82/barrel just after the JSE close.