The JSE closed softer on Friday with losses form the bourse’s biggest mining giants yet again driving it lower.

Losses mounted for mining giants Anglo American PLC and BHP Group in London and Sydney respectively, as iron ore fell over news that Chinese regulators were being encouraged to take measures over the recent spike in iron ore prices, which have been attributed to excessive speculation. This negative sentiment filtered onto miners on the JSE which tracked mostly lower on the day.

In Asian markets trading, the Hang Seng closed relatively flat as it shed 0.07% while in mainland China the Shanghai Composite Index closed 0.52% firmer. In Japan, the Nikkei gained 0.2%. In Europe and the USA counters turned red after the release of a better than expected US jobs report which showed that the US economy had added 224 000 jobs in June, which was better than the forecasted 160 000 jobs. The improved jobs numbers mean spread betters will cut their odds for a rate hike which does not incentivize investors to buy riskier assets such as stocks. 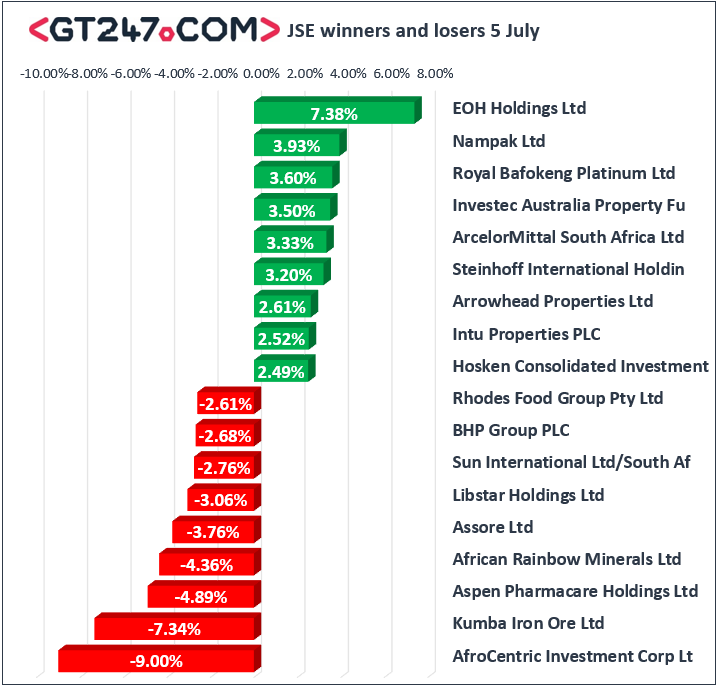 The JSE all-Share index eventually closed 0.44% weaker while the JSE Top-40 index shed 0.4%. The Industrials index advanced 0.36%, however the Resources and Financials indices fell 1.91% and 0.25% respectively.