The JSE rebounded to close firmer on Wednesday on the back of broad-based gains across all the major indices.

The local bourse had a strong outing despite relatively modest gains across most global equity indices. Investors were closely watching the US Fed chair, Jerome Powell’s testimony before US congress which started this afternoon. Following last week’s improved US jobs data, market participants had become skeptical that the US Fed would not cut rates at the next policy meeting. However, Jerome Powell signaled the Fed was still open to a rate cut in July as he described it as almost a certainty.

The US dollar plummeted on the back of this testimony which saw emerging market currencies surge. The rand had struggled earlier as it fell to a session low of R14.23/$, however it rallied as the testimony took place to a session high of R14.04/$. At 17.00 CAT the rand was trading 0.66% firmer at R14.07/$. 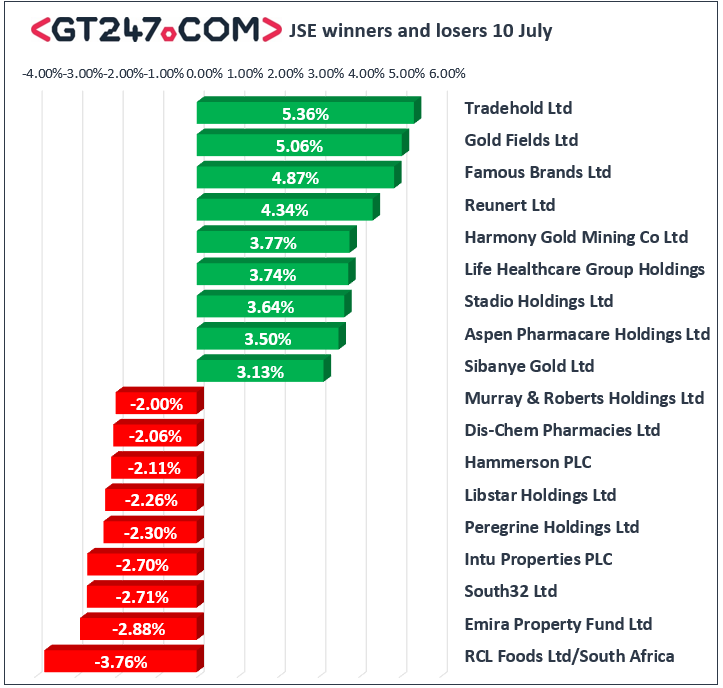 ArcelorMittal [JSE:ACL] plummeted in today’s session following the release of a trading statement which highlighted difficult trading conditions as the company is expecting to report significant losses. The company is revealed its plans to cut costs through at least 2000 job cuts. The stock eventually closed 15.9% lower at R2.91. Diversified miner South32 [JSE:S32] lost 2.71% to end the day at R29.80, Dis-Chem Pharmacies [JSE:DCP] struggled to end the day 2.06% lower at R24.24. Emira Property Fund [JSE:EMI] closed 2.88% weaker at R13.49 following the release of statement indicating the company’s non-binding proposal to acquire all the issued share capital of SA Corporate Real Estate.

The JSE Top-40 index eventually closed 1.15% firmer while the JSE All-Share index climbed 1.27%. In a complete turnaround from the prior session all the major indices closed firmer. Industrials added 1.52%, Financials gained 1.19%, while Resources added 0.87%.

Brent crude was supported by the big drop in US crude oil inventories as indicated by data released this afternoon. The commodity was trading 2.96% firmer at $66.06/barrel just after the JSE close.