The exuberance from the prior session faded on Tuesday as the JSE retreated on the back of a more cautious tone from market participants.

Despite the rally on Monday sentiment quickly turned pessimistic across most global markets after manufacturing PMI data showed that most economies were indeed slowing. The Australian central bank also took a looser monetary policy stance as it cut benchmark interest rates by 25 basis points to 1.00%, as it highlighted slowing inflation and economic growth as key fundamentals that led to its decision. With most major central banks taking a more accommodative monetary policy, investors are increasingly concerned over global growth prospects which have been exacerbated by the trade war between China and the USA.

Stocks in Hong Kong resumed trading today after having been closed for a holiday on Monday. Most equity markets struggled for direction as market participants sort for new clues on the trade war from either Donald Trump’s social media content and other news sources.

Volatility was also the main constant for the rand which fluctuated between gains and losses despite the US dollar trading within a very narrow range. The rand fell to a session low of R14.21/$ before it managed to recoup its losses to trade 0.25% firmer at R14.09/$ at 17.00 CAT. 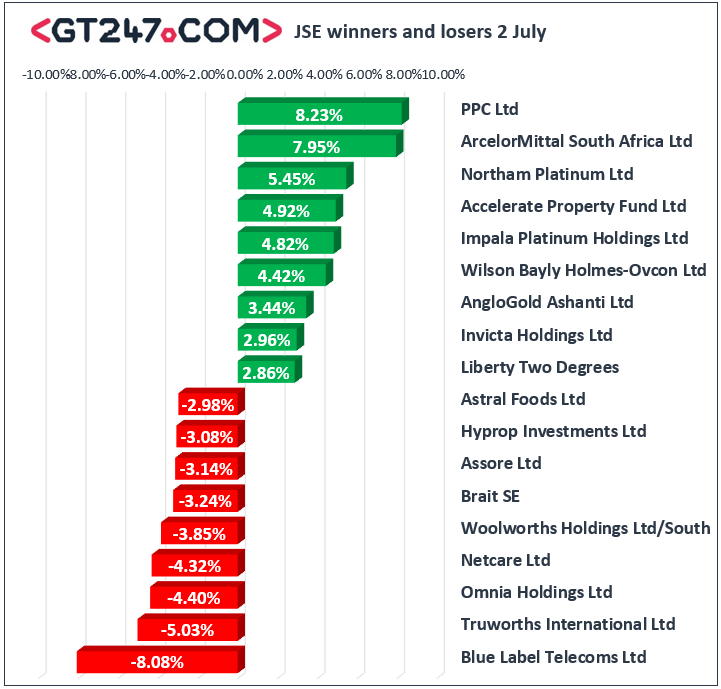 The JSE Top-40 index closed 0.71% lower while the broader JSE All-Share index fell 0.65%. The Resources index fell short of closing firmer as it closed 0.09% weaker. The Industrials and Financials indices added 0.69% and 1.06% respectively.

Brent crude tumbled in today’s session as focus shifted to the trade war concerns. The commodity was recorded trading 2.64% weaker at $63.24/barrel just after the JSE close.