Muzzled session for the JSE

The JSE was adrift on Friday as it traded mostly flat in line with other global markets which struggled for direction.

Markets in Asia did have some direction primarily on the back of weaker than expected Chinese GDP numbers which fell to a 30-year low of 6.0% QoY. This resulted in the Shanghai Composite Index closing 1.42% weaker while the Hang Seng lost 0.48%. The Japanese Nikkei eked out gains of 0.18%. Stocks in Europe and the USA were mixed as investors tried to gauge events with Brexit, US corporate earnings and weaker Chinese economic data.

Emerging market currencies edged higher on the day primarily on the back of a weaker greenback. The rand advanced to a session high of R14.74/$ before it retreated to trade 0.13% firmer at R14.80/$. 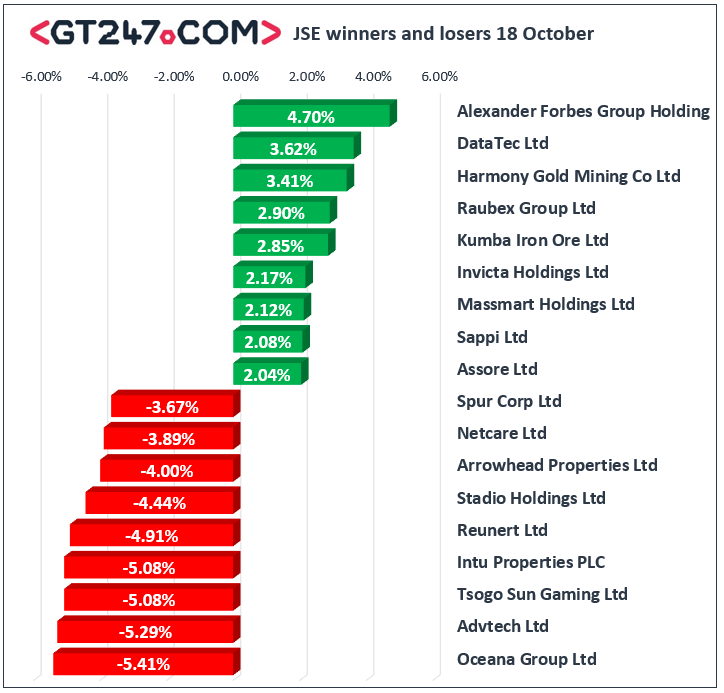 The JSE All-Share index eventually closed 0.28% weaker while the JSE Top-40 index shed 0.41%. The Resources index was the only major index to record gains as it closed 0.16% firmer. The Industrials and Financials indices lost 0.47% and 0.79% respectively.

Brent crude briefly traded above $60/barrel before it was recorded trading 0.42% softer at $59.70/barrel just after the JSE close.