Muted session for the JSE as central bank cuts rates

The JSE had a relatively muted session on Thursday as it struggled to find direction ahead of the South African Reserve Bank’s interest rate decision.

Locally, investors had their focus on the interest rate decision from the SARB which was widely expected to follow the footsteps of some of the world’s biggest central banks which are now officially in a monetary easing cycle. The SARB’s Monetary Policy Committee unanimously decided to reduce the repurchase rate by 25 basis points to 6.5%.

Initially there was a very little reaction in the rand which had been trading mostly flat until that point. However, it gained momentum towards the JSE close as it peaked at a session high of R13.88/$. At 17.00 CAT, it had retraced to trade 0.76% firmer at R13.89/$.

On the local bourse Pioneer Foods Group [JSE:PFG] had a stellar session as it climbed 6.3% to close at R77.60, while rand hedge British American Tobacco [JSE:BTI] rose 5.94% to end the day at R539.64. Zeder Investments [JSE:ZED] advanced 5.87% as it closed at R3.97, and coal miner Exxaro Resources [JSE:EXX] managed to gain 2.6% to end the day at R171.62. Anglo American Platinum [JSE:AMS] was buoyed by the release of a positive production update for the 2nd quarter which indicated that production was mostly in line with guidance. The stock eventually closed 3.42% firmer at R810.00. Other miners also advanced on the day with stocks such as Impala Platinum [JSE:IMP] gaining 4.21% to end the day at R73.05, while Northam Platinum [JSE:NHM] closed at R65.29 after adding 2.82%. 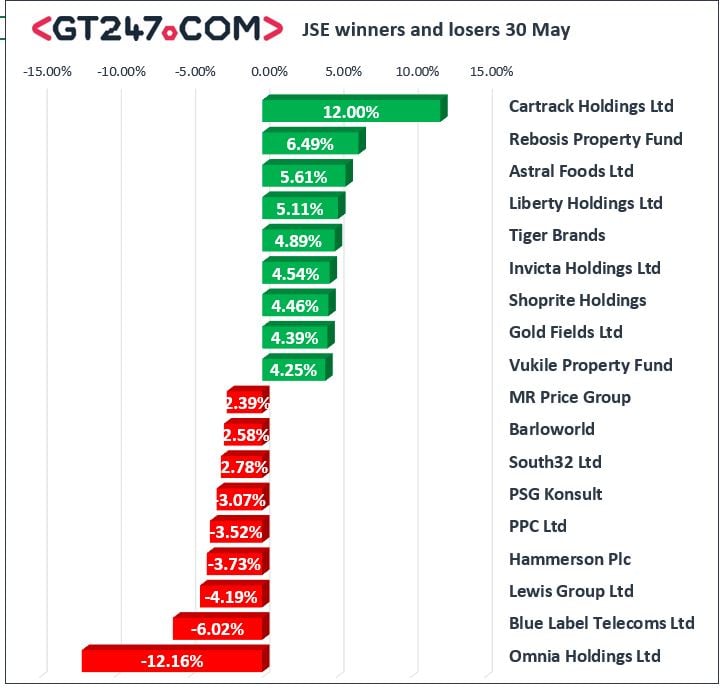 Losses were relatively modest on the JSE with exception of index heavyweights which retreated on the day. BHP Group [JSE:BHP] gave back some of the prior session’s gains as it lost 1.36% to close at R347.91, while its sector peer Anglo American PLC [JSE:AGL] shed 0.59% to close at R378.97. Naspers [JSE:NPN] lost a modest 0.28%, while pharma giant Aspen Pharmacare [JSE:APN] dropped 0.79% to end the day at R99.21. Other significant losses on the day were recorded for Imperial Logistics [JSE:IPL] which lost 1.78% to close at R48.13, as well as Blue Label Telecoms [JSE:BLU] which dropped 2.34% to end the day at R3.75.

The local bourse gained some momentum into the close to eventually close firmer. The JSE All-Share index closed 0.37% firmer, while the blue-chip JSE Top-40 index rose 0.33%. The Resources index closed marginally weaker as it dropped 0.03%, however the Financials and Industrials indices rose 0.75% and 0.27% respectively.

Brent crude remained subdued despite news that Iran had seized a foreign oil tanker which is suspected of smuggling oil in the gulf. Brent crude was trading 2.2% weaker at $62.27/barrel just after the JSE close.