The SARB left the repurchase rate unchanged at 6.75% as the MPC indicated that there was little evidence of demand side pressures to the economy. However, concerns about slowing global economic growth, declines in business confidence and potential supply side disruptions due to load shedding have seen the central bank revising its 2019 GDP growth forecast downwards to an average of 1.3% from 1.7%.

The rand’s weakness was exacerbated in today’s session by the US dollar which clocked a third consecutive session of significant gains against a basket of major currencies. The weakness in the Turkish lira has been the primary catalyst for the pullback in the rand however in today’s session the lira held its own, while the rand fell. Concerns over the upcoming ratings review from Moody’s on Friday are also fueling concerns of extended weakness should the sovereign rating be cut to junk. The rand was trading 0.5% weaker at R14.67/$ at 17.00 CAT, after having slipped to a session low of R14.74/$ earlier. 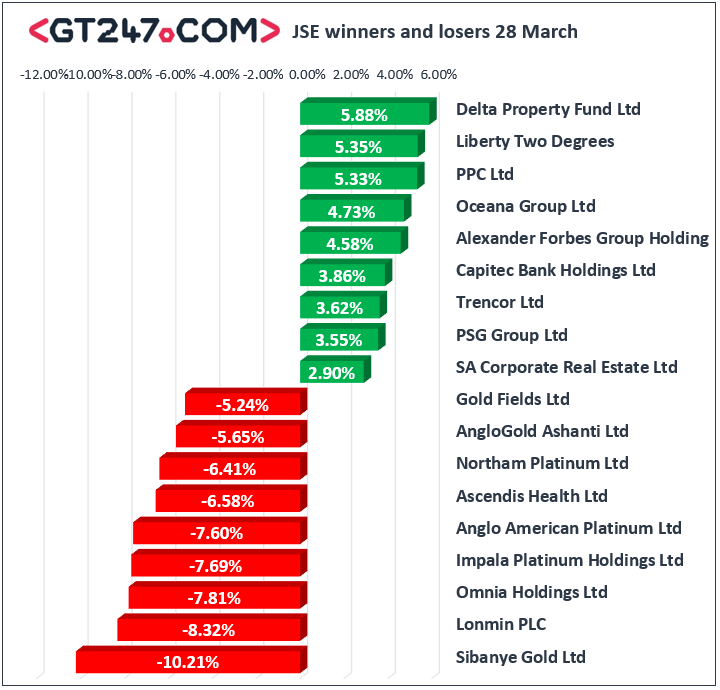 Capitec Bank Holdings [JSE:CPI] advanced on the day following the release of its full-year financial results which indicated healthy increases in earnings and dividends per share. The stock closed 3.86% firmer at R1340.00. Alexander Forbes [JSE:AFH] found some momentum as it climbed 4.58% to close at R5.02, while cement maker PPC Limited [JSE:PPC] added 5.33% to close at R4.74. Aspen Pharmacare [JSE:APN] gained 2.69% to close at R92.42, while rand hedge British American Tobacco [JSE:BTI] closed at R603.15 after it added 1.89%.

Brent crude came under pressure after Donald Trump made comments encouraging OPEC to boost production in order to cap oil prices. The commodity was trading 0.6% weaker at $67.42/barrel just after the JSE close.