Minor reprieve for the JSE as it inches higher

Most global equity indices were positive on Friday as investors were inspired by the Chinese Caixin Manufacturing PMI numbers which came in better than expected. These numbers lifted stocks in mainland China as the Shanghai Composite Index closed 2.19% firmer, while the Hang Seng firmed by 0.63%. In Japan, the Nikkei closed 1.02% firmer.

On the JSE, listed property stocks advanced on the back of broad-based positive sentiment for the sector. Hyprop Investments [JSE:HYP] which indicated declining profit margins in its half-year results also managed to score gains of 5.86% to end the day at R82.03. Sirius Real Estate [JSE:SRE] gained 3.81% to R11.71, while Hammerson PLC [JSE:HMN] added 3.11% to close at R72.57. African Rainbow Minerals [JSE:AIL] which has come under pressure lately, closed amongst the day’s biggest gainers after adding 6.89% to close at R4.50. Anheuser-Busch [JSE:ANH] recouped some of the previous session’s losses as it gained 6.26% to close at R1163.10. Mediclinic [JSE:MEI] advanced 5.24% to close at R61.70, while Richemont [JSE:CFR] firmed 2.79% to end the day at R110.00. 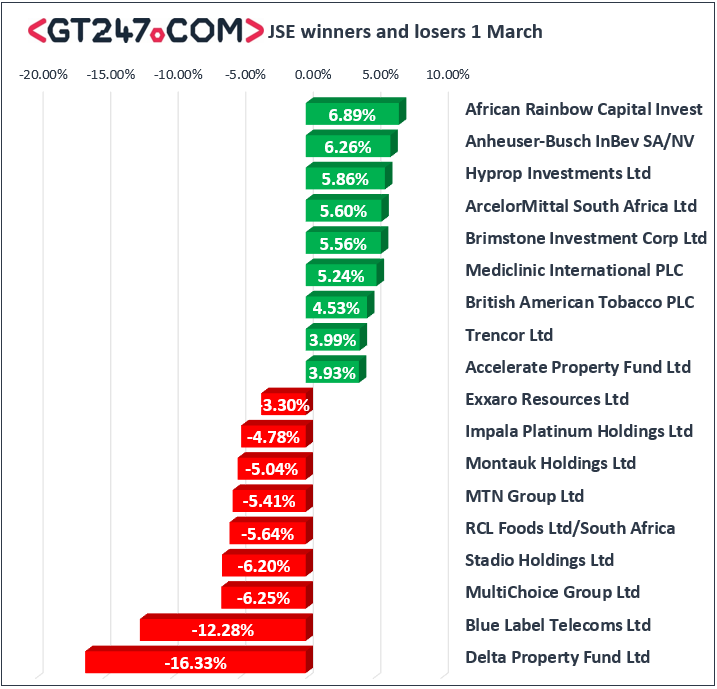 The JSE Top-40 index eventually closed 0.55% firmer while the JSE Al-Share index added 0.53%. The Financials index was the only major index to close weaker as it lost 0.2%. The Industrials and Resources indices added 0.73% and 0.46% respectively.

The rand retreated as the US dollar advanced against a basket of major currencies. The local currency fell to a session low of R14.18/$ before it was recorded at R14.15/$ at 17.00 CAT.

Brent crude relinquished most of its gains from earlier trading however it was still trading 0.09% firmer at $66.37/barrel just after the JSE close.