Miners tumble to lead losses on the JSE

The JSE tumbled on Wednesday primarily on the back of losses recorded amongst the index’s biggest miners.

The general mining index closed significantly weaker despite marginal gains from both the platinum and gold mining index. Other major indices on the local bourse also tracked lower albeit at a slower rate than the general mining index. This trend on the JSE contrasted with the movement in Asian markets earlier which closed mostly firmer. Even Naspers struggled to gain momentum despite Tencent Holdings closing 1.95% firmer on the Hang Seng.

There was some positive news locally with regards to South Africa’s inflation rate for the month of June. CPI YoY was recorded at 4.5% which is similar to its prior recording, while CPI MoM rose to 0.4% from a prior recording of 0.3%. The rand traded relatively flat in today’s session as it weakened to a session low of R13.94 before rebounding to trade 0.32% firmer at R13.87/$ at 17.00 CAT. 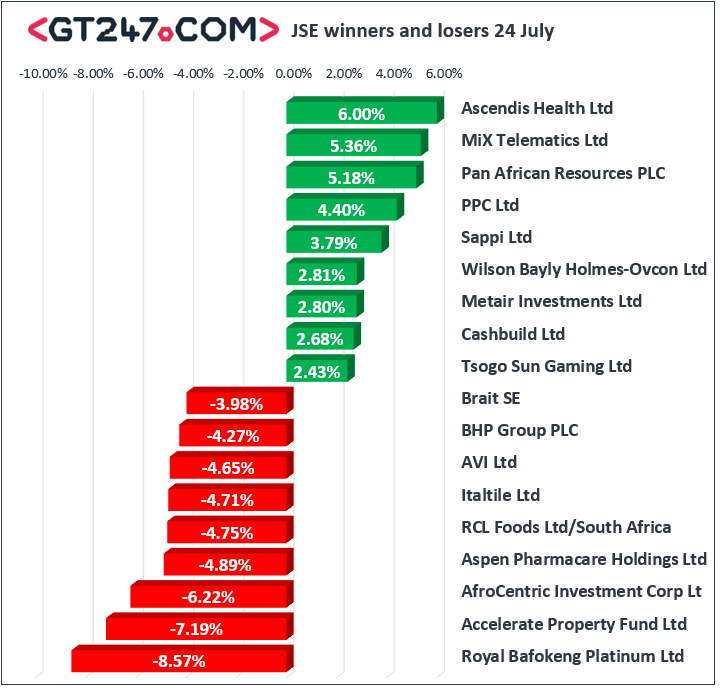 Gains were relatively modest for local blue-chips in a session where only a handful advanced. Commodity trading giant Glencore [JSE:GLN] managed to gain 1.81% to close at R48.44, while rand hedge Mondi PLC [JSE:MNP] added 1.65% to close at R319.34. Index heavyweight Naspers [JSE:NPN] gained some momentum towards the close eventually closing the day 0.47% firmer at R3508.83. Platinum miner Anglo American Platinum [JSE:AMS] climbed 1.36% to close at R844.00, while Impala Platinum [JSE:IMP] managed to post gains of 1.31% to close at R74.46. Ascendis Health [JSE:ASC] closed as one of the day’s biggest gainers following a late surge which saw it close 6% to close at R5.30.

The JSE Top-40 index closed 1.14% lower while the broader JSE All-Share index lost 1.12%. The Resources index was the biggest casualty of the day as it fell 2.29%, while the Industrials and Financials lost 0.63% and 1.36% respectively.

Brent crude advanced in today’s session as data of the USA showed declining oil inventories. The commodity was trading 0.78% firmer at $64.33/barrel just after the JSE close.