Milder declines for the JSE

Some form of pricing stability returned to the all-share index on Wednesday as the index closed reasonably softer on the day.

Sentiment remained subdued across most global markets even with key economic policy makers pledging to shore up liquidity in the financial markets. The Bank of England announced a 50 basis points cut to its main reference rate, matching the cut that was done by the US Fed to its interest rates. The European Central Bank indicated that it may act as soon as this week, while other key individuals such as the German chancellor reiterated that they will do whatever is necessary to shore up the economy. Stocks indices continue to trade firmly in the red and investors will be closely watching out for stimulus package announcements from the USA.

Locally, there was some disappointment recorded in the RMB/BER business confidence index which fell to a 20-year low of 18, from a prior recorded level of 26. The rand breached R16/$ as weakness amongst emerging market currencies remained. The rand was trading 1.21% weaker at R16.11/$ at 17.00 CAT. 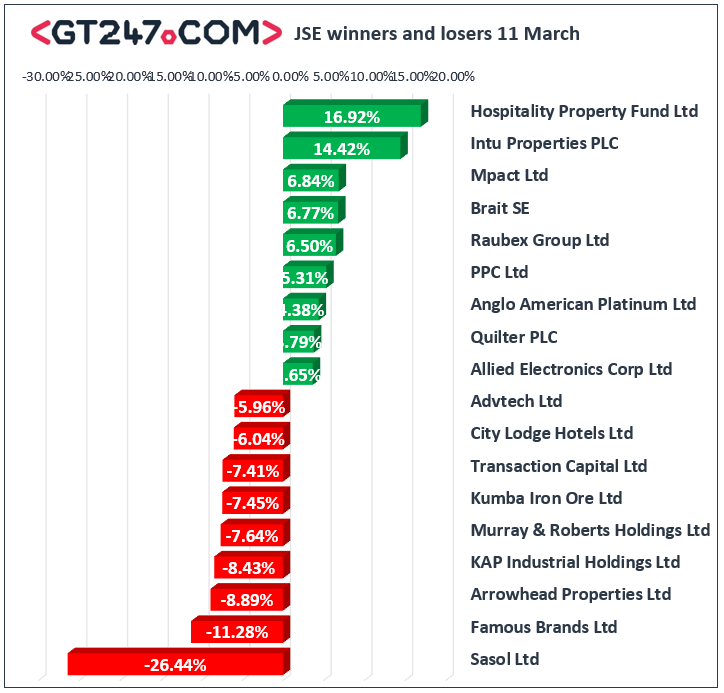 The JSE All-Share index closed 0.79% weaker while the blue-chip JSE Top-40 index lost 0.82%. The Resources index fell by the biggest margin as it lost 1.92%, while the Financials and Industrials indices shed 0.2% and 0.42% respectively.

Brent crude resumed its slide in today’s session as it was recorded trading 2.69% weaker at $36.22/barrel just after the JSE close.