The local bourse concluded a week of recovery as it closed firmer on Friday.

Global equity markets were buoyant on the possibility of the easing in the US-China trade war, following reports that Donald Trump had asked his administration to begin drafting a possible trade deal with China. Following a firmer close in US equity markets overnight, a similar trend was recorded in Asia on Friday where the Hang Seng surged 4.21%, while the Shanghai Composite Index and Nikkei gained 3.56% and 2.56% respectively.

Markets were also upbeat about the jobs data out of the USA which came in better than expected as the US economy added 250 000 jobs in October, compared to the forecasted addition of 200 000 jobs. Despite the jobs data, the US dollar remained weaker relative to other major currency pairs.

The local currency traded mostly firmer on the back of this weakness in the greenback. The rand reached a session high of R14.26/$ before it retraced to trade at R14.28/$ at 17.00 CAT. 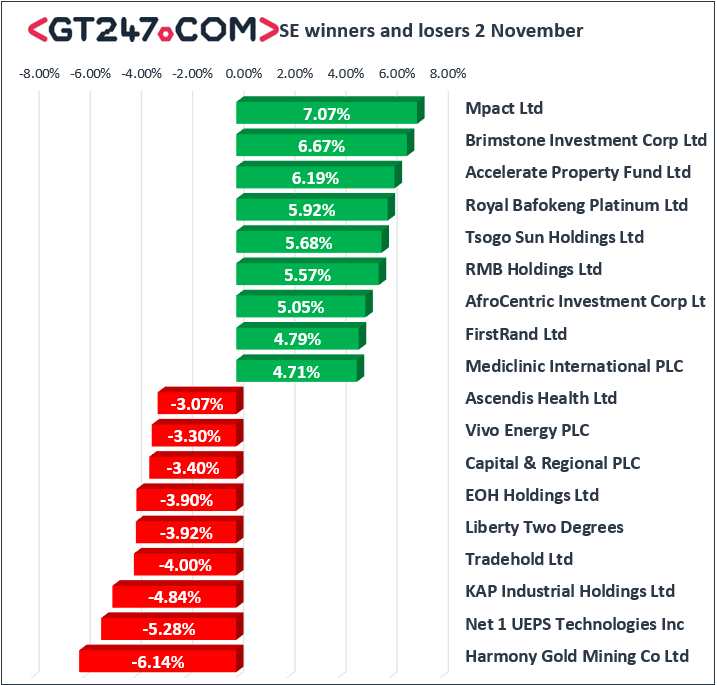 The blue-chip JSE Top-40 index closed 1.45% higher, while the broader JSE All-Share index gained 1.29%. The Resources index was the only major index to close weaker as it lost 0.9%. The Financials and Industrials indices gained 3.1% and 1.71% respectively.

Brent crude was mixed but after having slipped to a session low of $72.42/barrel, it recovered to trade at $72.72/barrel just after the JSE close.