China’s GDP QoY was recorded at 6.4% which was better than the forecasted growth of 6.3%. Industrial Production YoY expanded 8.5% easily beating estimates of 5.6%, while Retail Sales YoY grew by 8.7% from a prior recording of 8.2%. Despite this data Asian markets remained unchanged as the Hang Seng closed 0.02% weaker while the Shanghai Composite Index added 0.04%. The trend was similar in Europe where stocks also struggled to find a catalyst for significant direction. In the USA, relatively muted earnings releases saw the S&P500 and Dow Jones futures drift for most of the day’s session.

The US dollar also struggled for direction as it traded in a relatively narrow range. This did well for the rand which advanced to a session high of R13.92/$ before retracing to trade 0.39% firmer at R13.96/$.

On the JSE, Mediclinic [JSE:MEI] rose 5.53% to end the day at R59.52 mainly on the back of the release of its full-year results which showed an increase in revenue and a decline in earnings per share. Massmart [JSE:MSM] was also buoyant on the back of the release of its quarterly sales update which indicated that sales had increased by 5.8% YoY over the period. The stock closed 6.39% higher at R85.80. Clicks [JSE:CLS] released an impressive set of half-year results which indicated a healthy increase in headline earnings per shares and group turnover. The stock gained 3.99% to close at R184.07. EOH Holdings [JSE:EOH] had another standout day as the stock rose as high as R26.60 before retracing to close 12.98% higher at R22.80. Other significant gains on the day were recorded for Lonmin PLC [JSE:LON] which gained 7.15% to close at R13.49, as well as Sibanye Stillwater [JSE:SGL] which closed at R14.40 after gaining 6.59%. 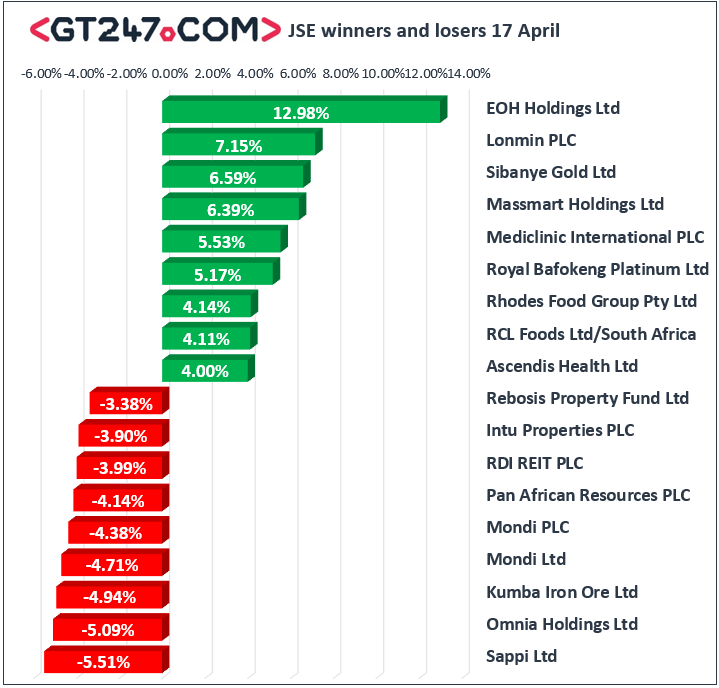 The JSE All-Share index closed flat after only managing to add 0.01%, while the JSE Top-40 index shed 0.05%. The Resources index fell 2.23%, however the Industrials and Financials indices gained 0.85% and 0.56% respectively.

Brent crude advanced marginally following a retracement in the prior session. The commodity was trading 0.22% weaker at $71.57/barrel just after the JSE close.