The JSE plummeted along with global stocks as heightened fears over the spread of the coronavirus outside of China escalated.

In Asia, the Nikkei was closed for a holiday however the main equity benchmarks on the Hang Seng and Shanghai Composite Index lost 1.79% and 0.4% respectively. Losses deepened in Europe where benchmarks tumbled by an average of at least 4%, while in the USA stocks opened sharply lower. With this flight to safety, fundamentals took a backseat as investors dumped riskier assets in droves.

Emerging market currencies also took a knock as investors sort after the less risky US dollar. The local currency fell to a session low of R15.18/$ before it was recorded trading 0.92% lower at R15.13/$ at 17.00 CAT.

Most stocks on the local bourse plummeted on the day with more losses being recorded for stocks which are dependent on China’s economic activity. Reports of lower production capacity amongst Chinese manufacturers has sent shivers across most global producers who trade with Chinese manufacturers. 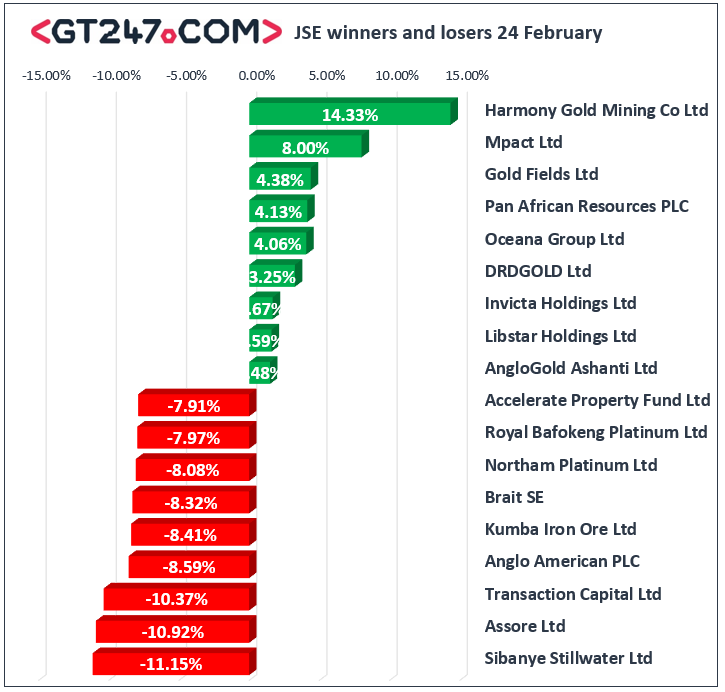 The JSE All-Share index plummeted 4.28% while the blue-chip JSE Top-40 index slumped 4.46%. The Resources index was the biggest loser amongst the major indices as it lost 5.6%. The Industrials and Financials indices lost 3.77% and 3.82% respectively.

Brent crude was not spared by the risk-off sentiment as the liquid gold was recorded trading 4.06% lower at $55.59/barrel just after the JSE close.