The local bourse plunged along with other global stocks as the sell-ff in stocks intensified over worsening fears over the spread of the coronavirus.

US equity futures traded under considerable pressure as they hit the 5% circuit breaker early on Monday morning which a brought a halt to trading. These limits adjust to 7% and 13% respectively when the spot market opens, of which the 13% circuit breaker was hit which resulted in trading being halted on US stock markets for 15 minutes after the open. Turbulence has become the norm across most global markets as investors dump riskier assets in droves.

The US Fed cut its interest rates by 100 basis points to 0.25% as it steps up efforts to keep the US economy afloat. The Fed also pledged another $700 billion to quantitative easing as it seeks to ease liquidity in the markets. Most central banks will look to take bigger monetary easing policies and locally, we do expect to the SARB to loosen monetary policy on Thursday if they do not do it earlier.

The US dollar has remained buoyant as investors continue pumping into the safe haven currency. Emerging market currencies including the rand continue to record outflows. The local unit tumbled as low as R16.74/$ before it was recorded trading 1.92% lower at R16.58/$ at 17.00 CAT. 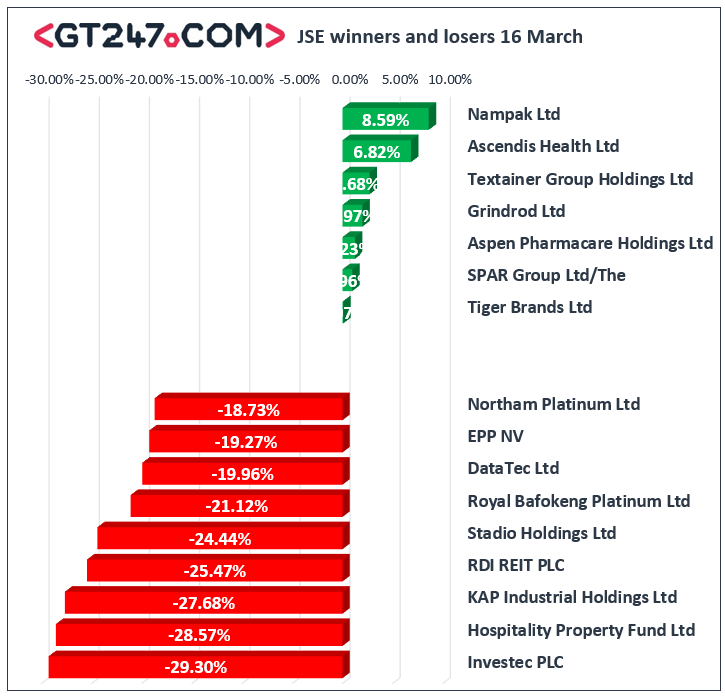 The JSE Top-40 index trimmed some of the losses as it closed 7.25% lower, while the JSE All-Share index fell 7.6%. The Financials index was the biggest casualty of the day as it lost 10.09%, while the Industrials and Resources indices fell 6.61% and 7.3% respectively.

Losses also deepened for brent crude which was trading 9.84% lower at $30.55/barrel just after the JSE close.