The losses on the JSE deepened as it fell for a second consecutive session to close softer on Tuesday.

The local bourse shrugged off the gains in other global markets as it was weighed down by broad based losses across all the major indices, and more particularly from deeper losses in the financials index as well as the industrials index. This contrasted with stocks in Asia which closed mostly higher on Tuesday as well as European counters which edged up marginally. US indices looked to retest their recent all-time highs when US markets opened this afternoon.

Global investors searched for more clues on the “phase one” deal of the current ongoing trade talks between Beijing and Washington D.C as current consensus suggest a partial deal is almost certain. With no economic data being released locally, there was no other catalyst for upside momentum. 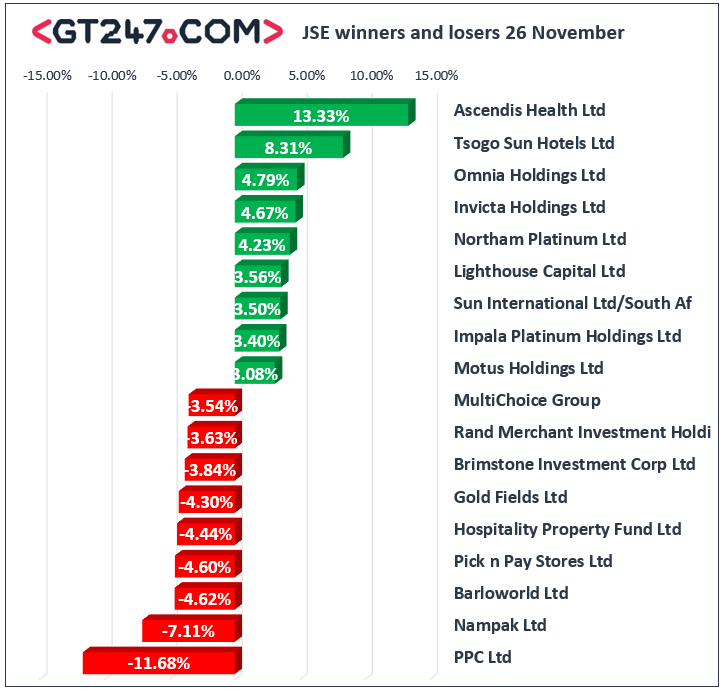 Tsogo Sun Hotels [JSE:TGO] closed amongst the day’s biggest gainers after it advanced 9.42% to close at R3.95. Omnia Holdings [JSE:OMN] was buoyed by its return to profitability which was highlighted in its half-year results. The stock gained 4.79% to close at R31.75. Transaction Capital [JSE:TCP] reported higher earnings in its full-year results which saw the stock gain 3.14% to close at R22.00. Platinum miners gained some traction in today’s session as gains were recorded for Northam Platinum [JSE:NHM] which rose 4.23% to close at R109.00, and Impala Platinum [JSE:IMP] which added 3.4% to close at R115.57. Gains were also recorded for Motus Holdings [JSE:MTH] which climbed 3.08% to close at R72.93, and Aspen Pharmacare [JSE:APN] which closed at R118.62 after adding 1.37%.

The JSE Top-40 index closed 1.3% weaker while the JSE All-Share index lost 1.19%. The Resources index lost a more modest 0.17% while the Industrials and Financials indices dropped 1.45% and 2.35% respectively.

Brent crude resumed its uptrend in today’s session before it was recorded trading 0.64% firmer at $63.02/barrel just after the JSE close.