Pressure mounted on the JSE on Friday which saw it close weaker in tandem with trends in global markets which traded under pressure.

Concerns over the spread of the coronavirus heightened on Friday as reports of new infections and detections keep surfacing across the globe. A gauge for global stocks indicates this week as the worst week for global stocks in terms of losses since August 2019. With the Chinese equity markets still closed, the main gauges for performance in Asia where the Hang Seng which lost 0.52%, and the Nikkei which advanced 0.99%. Stocks in Europe remained in a slump while US markets were set to open lower despite a firmer close on Thursday.

Emerging market currencies continue to hemorrhage as investors dump riskier currencies in favour of more stable developed market currencies. The rand slumped further in today’s session as it slipped to a session low of R14.97/$. At 17.00 CAT the rand was trading 1.19% weaker at R14.93/$. 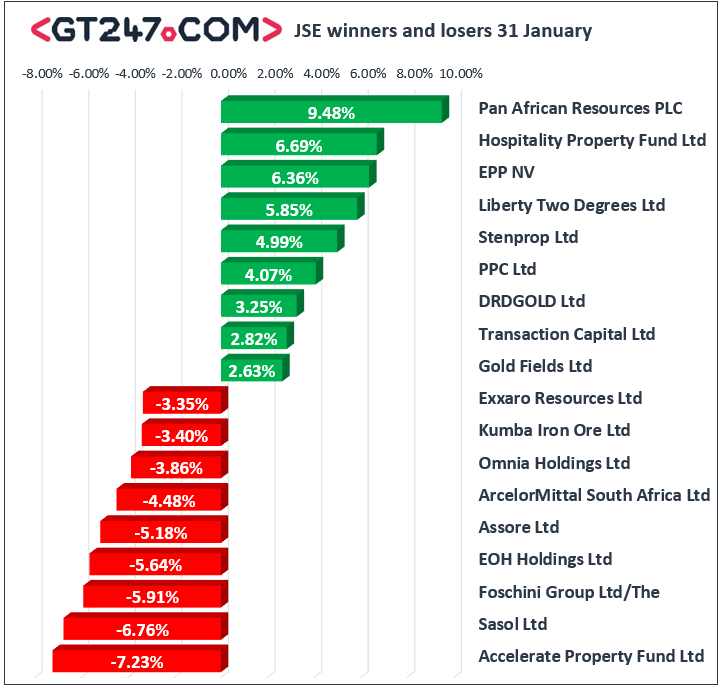 Pan African Resources [JSE:PAN] closed amongst the day’s biggest gainers following the release of its half-year statement in which the company indicated that they are expecting a steep jump in earnings. The stock eventually closed 9.48% higher at R2.54. Listed property stocks recorded decent gains on the day with surges being recorded for Hospitality Property Fund [JSE:HPB] which rallied 6.69% to close at R7.50, as well as EPP NV [JSE:EPP] which climbed 6.36% to close at R17.38. Cement producer PPC ltd [JSE:PPC] rallied 4.07% to close at R2.30, while tobacco producer British American Tobacco [JSE:BTI] gained 1.9% to close at R659.00. Gains were also recorded for DRD Gold [JSE:DRD] which rose 3.25% to close at R9.52, as well as Glencore [JSE:GLN] which closed at R43.76 after gaining 0.69%.

The blue-chip JSE Top-40 index eventually closed 0.95% weaker while the JSE All-Share index lost 0.9%. The biggest decline was recorded for the Financials index which lost 2.13%, while the Industrials and Resources indices dropped 0.64% and 0.67% respectively.

Brent crude dipped below $57/barrel eventually being recorded at $0.85% weaker at $56.84/barrel just after the JSE close.