The JSE closed weaker on Tuesday as South Africa’s jobless rate climbed to a level last reached 11 years ago.

Statistics SA released South Africa’s Q2 jobless data which showed that the unemployment rate climbed to 29% which is significantly higher than the consensus forecast of 27.8%, and the prior recording of 27.6%. The expanded unemployment rate which also considers individuals who are not economically active increased to 38.5% from 38%.

Eskom also added to the day’s somber tone as it announced a R20.7 billion loss for its financial year ending March 2019. The state utility which has been seeking approval from regulators for substantial hikes in tariffs, still needs government bailouts for it to continue as a going concern.

The rand had a volatile session as it quickly fell to a session low of R14.23/$ following the release of the unemployment rate numbers. However, it quickly recovered to peak at a session high of R14.13/$ before it steadied to be recorded trading 0.13% weaker at R14.17/$ at 17.00 CAT.

Massmart [JSE:MSM] took the spotlight amongst the day’s biggest losers following the release of a poor trading statement for the quarter which highlighted smaller margins and lower sales volumes. The stock plummeted 15.45% to close at R49.80. Hammerson PLC [JSE:HMN] continued to reel from the weaker half-year results that were released on Monday, as the stock lost another 7.88% to close at R41.29. Brait [JSE:BAT] also struggled in today’s session as it lost 7.18% to close at R13.96, while rand hedge British American Tobacco [JSE:BTI] fell 4.99% to close at R514.74. Listed property counties exposed to the United Kingdom and Brexit also struggled on the day with significant losses being recorded for Intu Properties [JSE:ITU] which lost 6.85% to close at R12.11, while Capital and Counties [JSE:CCO] dropped 5.54% to close at R36.01. 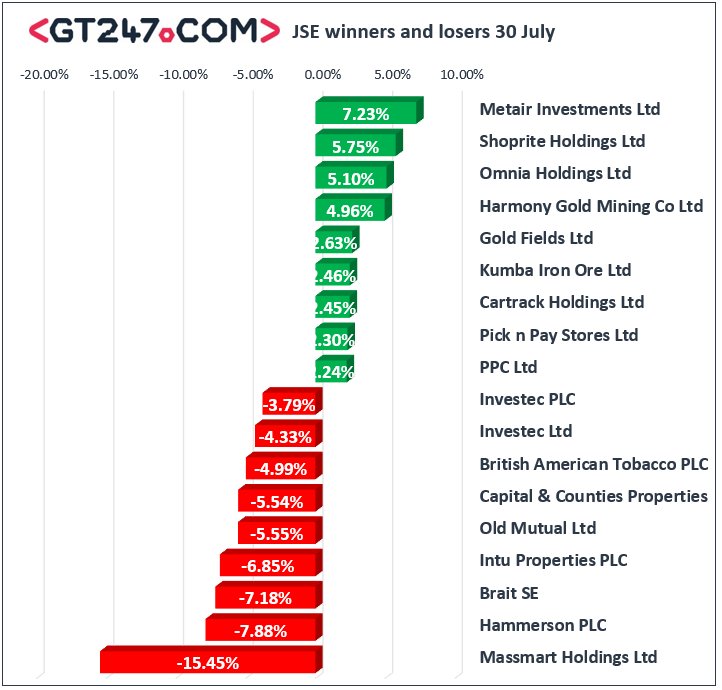 Of the day’s gainers, Shoprite [JSE:SHP] brought some optimism in the retail sector following the release of an improved trading update compared to the previous quarter. The stock eventually closed the day 5.75% higher at R153.97. Woolworths [JSE:WHL] also rose on the day to close 1.86% to close at R55.28, while Pick n Pay [JSE:PIK] added 2.3% to close at R66.19. Gold miners also recorded decent gains in today’s session despite the metal price trading mostly flat. Harmony Gold [JSE:HAR] gained 4.96% to close at R37.00, while Gold Fields [JSE:GFI] closed at R79.65 after gaining 2.63%.

Despite opening marginally firmer the JSE eventually closed significantly weaker as pessimism increased due to weaker local economic data and earnings. The All-Share index closed 1.47% weaker while the blue-chip JSE Top-40 index lost 1.6%. All the major industries closed softer on the day with the Financials index dropping the most as it lost 1.83%. The Industrials and Resources indices lost 1.45% and 1.32% respectively.

Gains in brent crude were relatively modest on the day which saw it trading 0.57% firmer at $63.98/barrel just after the JSE close.