Equity markets traded mixed on Friday as uncertainty around impeachment proceedings in the US continued to hold the market back.  Fears around a potential derailment of a SIN-US trade pact emerged on Thursday sending shivers in the markets.  The Brexit conundrum has taken another twist this week as Boris Johnson continued to lose favour amongst his peers in the House of Commons after the Supreme Court overruled the prorogation of Parliament.  The Bank of England made inferences that it would have to cut interest rates further even if the United Kingdom was able to leave the European Union with a deal which sent the Pound spiralling.

Asian markets were mixed on Friday as the Nikkei and the Hang Seng eased 0.77% and 0.335 respectively, whilst the Shanghai 300 and the ASX 200 advanced 0.3% and 0.58% respectively. All eyes are on the US now as political uncertainty continues to hamstring Asian markets.

Gains were recorded in Intu Properties Plc on Friday, which gained 7.56% on the day to trade at 854c. Notable gains were recorded in Netcare Limited [JSE:NTC],  EOH Holdings Ltd [JSE:EOH],  Raubex Group Ltd [JSE:RBX]  and Imperial Logistics Ltd [JSE:IPL]  which gained 6.87%, 5.81%, 5.01% and 3.83% respectively.  Clover [JSE:CLR], the branded foods and beverage business seems to be on track for the much talked about take over, the share price has rallied higher towards the proposed buyout price of 2500c per ordinary share. 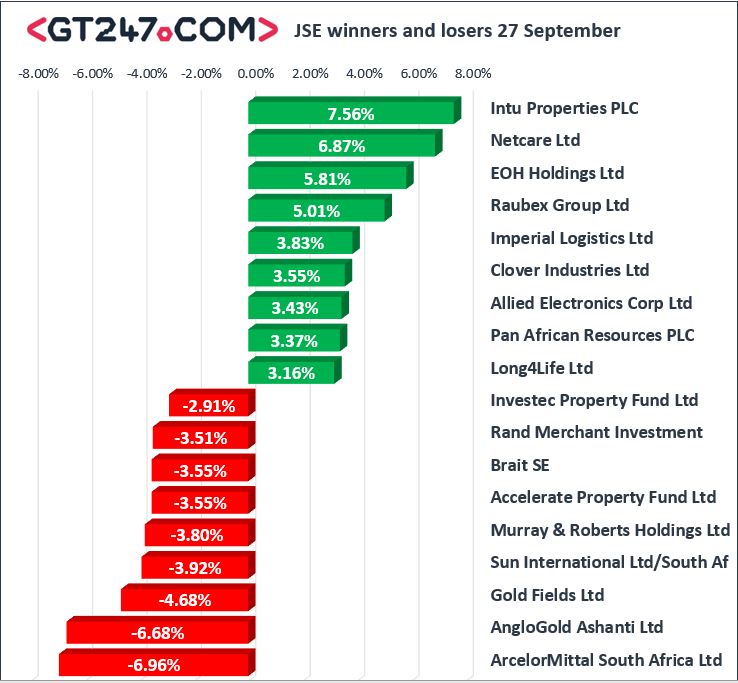 The JSE All-Share index closed 0.17% weaker whilst the JSE Top-40 index retreated 0.15%. The Financials index eased on the day to trade 0.84% lower. The Industrial and Resource indices were mixed as the industrials eased 0.02% whilst the resources gained 0.27% respectively.

Brent crude continued to trade lower on the day as a barrel of Brent crude was changing hands at $61.29 at 17:00 CAT. Tensions in the middle east continue to wreak havoc in the oil markets as oil traders remain on edge.