Local market closes the day flat ahead of G20 summit

Equity markets struggled to find direction on Thursday despite a rally in US equities overnight.  The JSE opened the day firmer as local equities shadowed the moves made on global markets overnight.  The price action in the first session of trade pointed to another strong rally on the local bourse, however initial gains dissipated into thin air.

Asian markets were mixed on the day as the Nikkei 225 advanced 0.22%, the Hang Seng was marginally firmer adding 0.03%. Loses were recorded by Shanghai index which shed 1.02% on the day.  Asian tech shares advance for the week was thoughted on Thursday as the blue-chip tech stocks pulled back from the highs earlier on in the week. Tencent Holdings shed 0.89% to trade at $312 HKD.

Gains were posted by NEPI Rockcastle Plc which rallied 11.72% after the business rebuffed the Viceroy report which was released on Wednesday morning. The property concern took a tumble on Wednesday after the infamous research house released to the market a document which lacked substance and evidence. Invicta [JSE: IVT], Cartrack [JSE: CTk], Greenbay Properties [JSE: GRP] and EOH [JSE: EOH] on the day gaining 9.45%, 7.32%, 5.88% and 4.4%3 respectively.

Notable losses were recorded in Intu Properties [JSE: ITU], the property company shed 39.46% to trade at 2071c a decline of 1344c. The property company highlighted that the consortium which was considering taking it over had withdrawn their offer. The consortium has sighted macroeconomic factors, the pending Brexit deal. Concerns over the net debt of the business and compression of the distribution(dividend) were sighted as some of the reasons the share price took a hit on the day 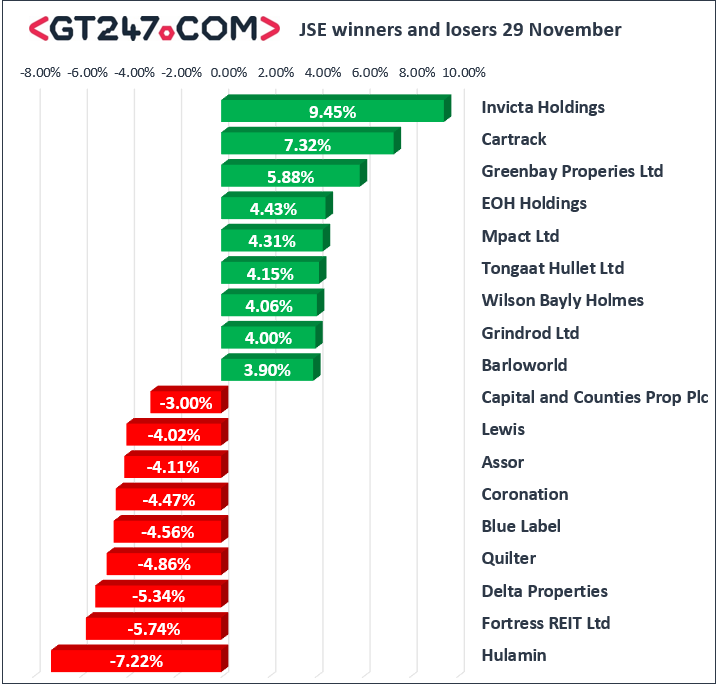 The Rand was firmer on the day as the local unit continued to advance towards the key R13.50 level.  The local unit was trading at R13.62 against the dollar at 17:00hrs. The Rand was firmer against the crosses, the Euro was changing hands at R15.51 whilst the Pound was trading at R17.41 against the Rand. The Pound remains in a precarious position as Teresa May continues to try and get a deal done with the European Union.  The Prime Minister of the UK is running against the clock and at the moment the clock appears to be getting the better of her.  South African 10 Year Bond (R186) yields were firmer on the day and were trading at 8.89% at 17:00 CAT.