China released its Q3 GDP QoY numbers which came in worse than expected at 6.5% which was lower than the forecasted 6.6%. Industrial Production YoY also slowed down to 5.8% from a prior recording of 6.1%. Chinese stocks briefly traded weaker in Friday’s session, but they quickly rebounded as regulators pledged to put measures to encourage commercial banks to lend to private companies and to ease corporate financing.

As a result, Chinese equities surged with the mainland benchmark rising by 2.97%, while the Hang Seng firmed by 0.42%. In Hong Kong, Tencent Holdings recovered in the second session to end the day up 0.36% at $HK282.00 per share.

The JSE opened marginally firmer but it struggled to maintain those gains as it traded mostly softer. Significant gains were recorded for Clover Industries [JSE:CLR] after the company issued a cautionary statement notifying shareholders about negotiations with a 3rdparty, regarding a potential acquisition by the 3rdparty of its entire issued share capital. The stock jumped by 18.44% to close at R16.70. 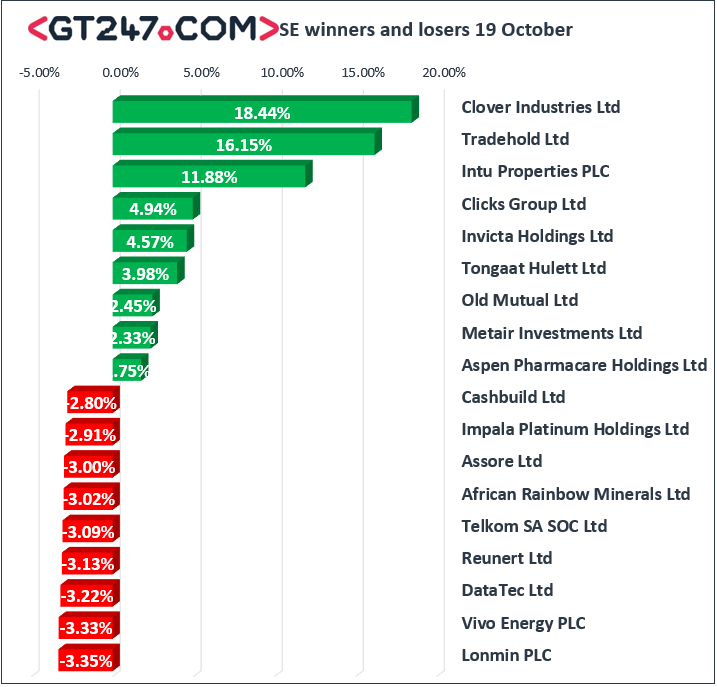 After weakening overnight, the rand pulled back on Friday as the US dollar took a breather from its rally. The rand managed to strengthen to a session high of R14.31/$ before being recorded at R14.40/$ at 17.00 CAT.

Brent crude notched up above $80/barrel to peak at a session $80.88/barrel. The commodity was trading at $80.44/barrel just after the JSE close.