The JSE retreated on Tuesday as the resources index relinquished most of the prior session’s gains.

The trend on the JSE contrasted with the trend across most global markets which traded marginally higher. The Hang Seng closed 0.23% firmer while the Shanghai Composite Index added 0.39%. Markets in Japan were closed for a holiday. Stocks in Europe also edged higher while markets in the USA were spurred by good earnings from Lockheed Martin, shrugging off disappointment from McDonald’s earnings.

With no local data being released locally, sentiment on the JSE is still being driven by global trends. However, with local stocks starting to release their earnings there should be more stock specific events driving price action in the coming weeks.

Sasol [JSE:SOL] which has a looming deadline for the release of its financial results came dropped significantly in today’s session as it closed 7.32% lower at R267.22. Kumba Iron Ore [JSE:KIO] fell 6.38% to close at R336.81 following the release of sales and production report for the 3rd quarter which showed lower sales and production volumes for the period. Pan African Resources [JSE:PAN] lost 3.26% as it closed at R2.08, AngloGold Ashanti [JSE:ANG] retreated 2.96% to close at R298.56, while Anglo American Platinum [JSE:AMS] reported lower production volumes for the 3rd quarter which saw the stock close 3.82% weaker at R1054.00. Commodity trading giant Glencore [JSE:GLN] lost 2.28% to close at R43.78, while healthcare specialist Mediclinic [JSE:MEI] closed at R71.56 after falling 1.74%. 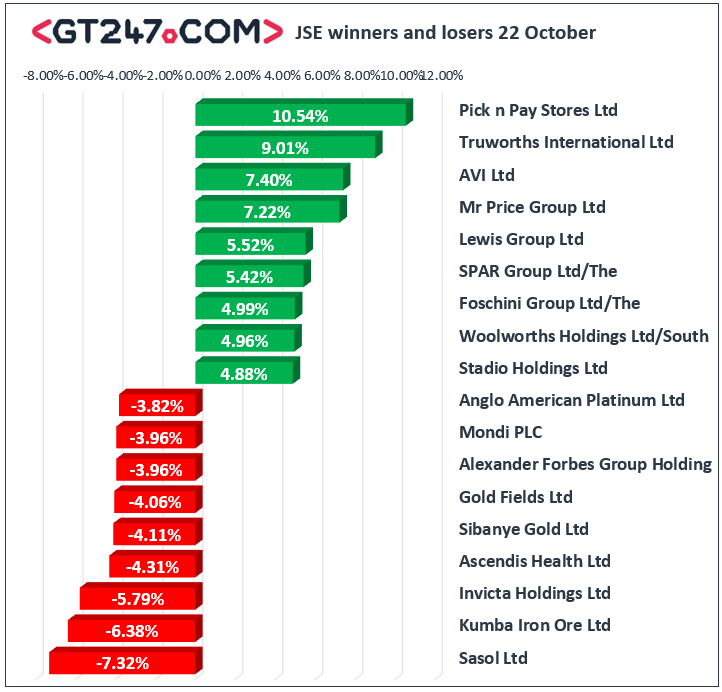 The JSE All-Share index eventually closed 0.27% weaker while the JSE Top-40 index lost 0.37%. The Resources came under significant pressure as it fell 2.1%. The Industrials and Financials indices managed to record gains of 0.36% and 1.02% respectively.

Brent crude surged as traders were optimistic that concessions could be made in the Sino-US trade talks which would not have huge adverse impacts on supply. Brent crude was trading 2.1% higher at $60.20/barrel just after the JSE close.