The JSE started the week on the backfoot as it closed weaker on Monday on the back of losses in the industrials and financials indices.

The local bourse diverted from earlier trends in Asia where the major indices closed mostly higher primarily on the back of better than expected Chinese Caixin manufacturing PMI data. The Nikkei surged 1.01%, while the Shanghai Composite Index and the Hang Seng added 0.19% and 0.37% respectively. Despite mostly better than expected manufacturing data for most members of the European bloc, stocks in that region traded mostly lower. US equity markets opened marginally softer as Donald Trump resumed his calls for the Fed to loosen its monetary policy further.

Locally, there was disappointment in terms of economic data as the ABSA manufacturing PMI recording for November fell to 47.7 from a prior recording of 48.1. The rand retreated briefly from Friday’s highs as it fell to a session low of R14.71/$. At 17.00 CAT, the rand was trading 0.08% softer at R14.65/$. 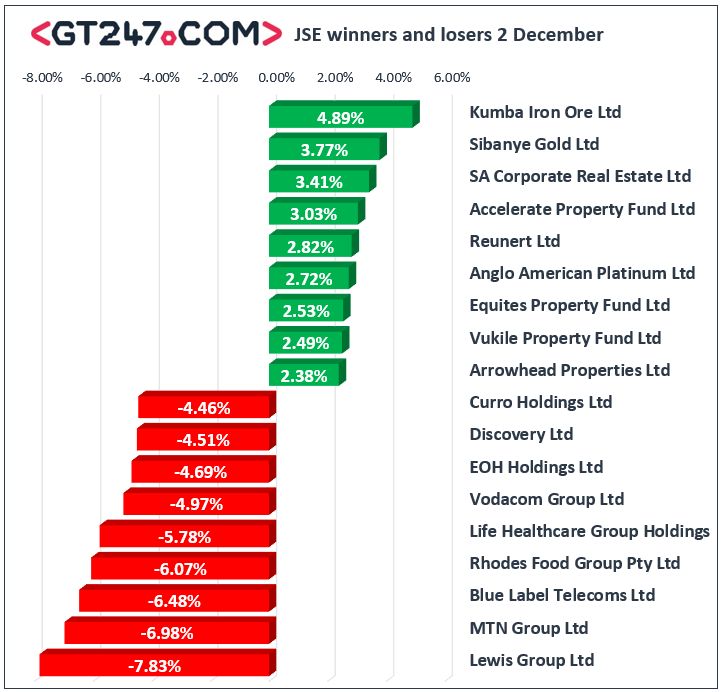 The JSE All-Share index eventually closed 0.98% weaker while the JSE Top-40 index lost 0.99%. The Resources index was the only major index to close firmer as it gained 0.51%. The Industrials and Financials indices fell 1.84% and 1.26% respectively.

Brent crude recovered from Friday’s slump in today’s session before it was recorded trading 1.87% firmer at $61.63/barrel just after the JSE close.