The JSE advanced on Tuesday primarily on the back of gains in the financials and industrials indices.

On the global markets, attention shifted to major US banks which released their earnings results for the 4th quarter of 2019. JP Morgan stood out as it widely beat most analyst estimates after it reported a surge in both revenues and earnings. As a result, US equity futures tracked mostly higher on the day. The outlook was rather mixed in Asia and Europe where modest gains and losses were recorded for the major indices.

There was some disappointment in terms of local economic data as South Africa’s consumer confidence for the 4th quarter was recorded -7 which was unchanged from the prior recorded level. The rand was volatile as it fell to a session low of R14.49/$ before it found momentum in the afternoon to surge to a session high of R14.35/$. At 17.00 CAT, the rand was trading 0.05% weaker at R14.40/$. 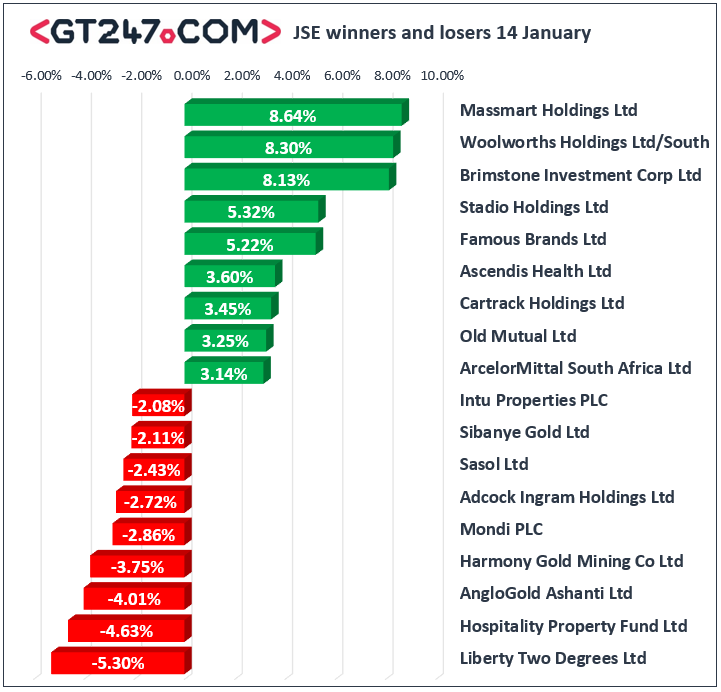 The JSE Top-40 index eventually closed 0.74% higher while the broader JSE All-Share index gained 0.69%. The Resources index closed 0.53% softer while the Industrials and Financials indices managed to gain 1.15% and 1.69% respectively.

Brent crude found some traction today’s session as it was recorded trading 0.59% higher at $64.61/barrel just after the JSE close.