The JSE retreated on Wednesday led by losses on the resources index on the back of relatively weak mining production numbers and weaker rand metal commodity prices.

Rand metal commodity prices fail mainly on the back of the stronger rand which strengthened against the greenback. The rand surged along with other emerging market currencies as it peaked at a session high of R13.85/$. At 17.00 CAT, the rand was trading 0.29% firmer at R13.93/$.

The local bourse retreated despite US markets retesting their all-time highs as well as gains being recorded in Europe. Woolworths [JSE:WHL] surged mainly on the back a positive trading statement for the year ended 30 June 2019. The stock climbed 7.86% to close at R52.95. Other retailers also firmed on the back of the stronger rand with gains being recorded Mr Price [JSE:MRP] which gained 2.01% to close at R197.00, as well as Truworths [JSE:TRU] which added 1.94% to end the day at R67.70. Delta Property [JSE:DLT] also recorded significant gains on the day as it closed 4.28% firmer at R1.95, while Investec Property Fund [JSE:IPF] managed to post gains of 2.61% to close at R15.75. 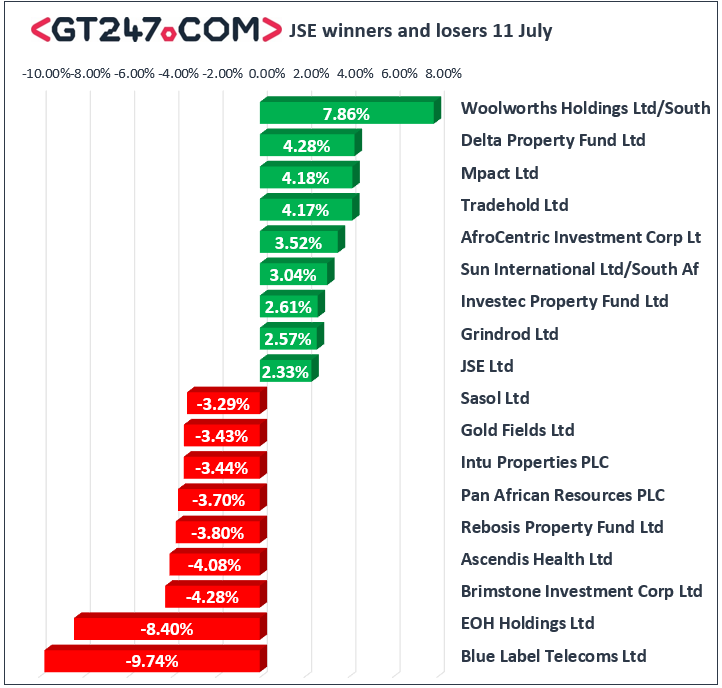 Brent crude rallied overnight, and it was sill trading relatively firmer for most of the day. It was trading 0.18% weaker at $66.94/barrel just after the JSE close.