Local bourse holds on to gains

The local bourse barely closed firmer on Monday after it relinquished most of its earlier gains.

The JSE tried to take a leaf from the earlier trend in Asian equities were the Hang Seng surged 1.11% while the Shanghai Composite Index gained 0.98%. The Nikkei was closed for a holiday. Stocks in Europe struggled, while US stocks advanced ahead of the signing of a partial trade deal with China. With no economic data being released locally, the JSE looked for direction from other global markets.

The US dollar advanced against a basket of major currencies which also saw the rand lose ground against it in the afternoon session. The local currency quickly fell to a session low of R14.45/$ towards the JSE close, before it was recorded trading 0.58% weaker at R14.44/$ at 17.00 CAT.

On the JSE, gains were led mostly by resources which saw DRD Gold [JSE:DRD] rally 5.55% to close at R8.75, while African Rainbow Minerals [JSE:ARI] surged 4.49% to close at R173.50. Diversified miner, South32 [JSE:S32] gained 2.81% to close at R27.76, while commodity trading giant Glencore [JSE:GLN] added 1.39% to close at R45.17. Massmart [JSE:MSM] surged following the announcement that it had recently conducted a store optimization project that highlighted some underperforming stores, and as a result the company will be embarking on downsizing exercise which will result in store closures and retrenchments. Massmart eventually closed 5.8% weaker at R51.64. Gains on the day were also recorded for Telkom [JSE:TKG] which rallied 6.84% to close at R35.00, and Naspers [JSE:NPN] which gained a more modest 0.57% to close at R2389.03. 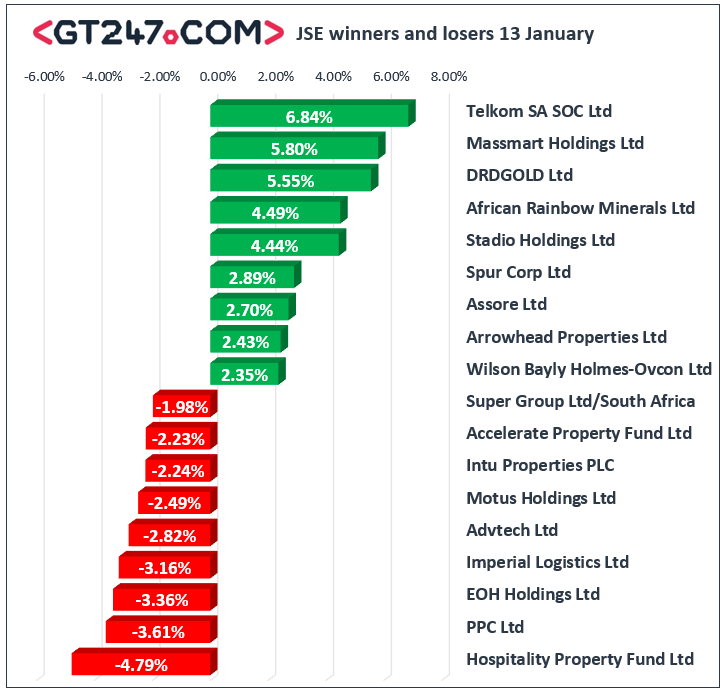 Ascendis Health [JSE:ASC] came under significant pressure as it plummeted 10.32% to close at R1.39. Listed property stocks traded mostly weaker which saw losses being recorded for Accelerate Property Fund [JSE:APF] which lost 2.23% to close at R1.75, Hyprop Investments [JSE:HYP] which retreated 1.61% to close at R55.49, and Fortress REIT [JSE:FFB] which closed at R7.87 after dropping 1.01%. MTN group [JSE:MTN] closed 1.28% weaker at R82.60 despite the announcement that their case of a USD2 billion tax demand in Nigeria had been withdrawn. Losses were also recorded for Motus Holdings [JSE:MTH] which lost 2.49% to close at R79.23, FirstRand [JSE:FSR] which weakened by 1.46% to close at R59.32, and Truworths [JSE:TRU] which closed at R46.70 after falling 1.46%.

The JSE All-Share index eventually closed 0.15% firmer, while the JSE top-40 index gained 0.19%. the Financials index came under considerable pressure as it shed 0.96%. The Industrials and Resources indices gained 0.34% and 0.62% respectively.

Brent crude continues to retreat as tensions in the Gulf moderate. The commodity was trading 0.66% weaker at $64.58/barrel just after the JSE close.