The JSE closed firmer on Tuesday following a mixed session in which the local bourse struggled for direction.

With global market sentiment still being driven by the developments and comments around the Sino-US trade war, investors are increasingly becoming skeptical to take big bets on stocks. However, in today’s session Asian counters tracked mostly higher following the firmer closes in US markets trading overnight. The Shanghai Composite Index surged 1.36% while the Japanese Nikkei gained 0.96%. The Hang Seng closed marginally softer as it dropped 0.06%. Although modest, stocks in Europe advanced on the day including the FTSE 100 which resumed trading following a holiday on Monday.

Locally the rand continues to get its direction from external factors such as US dollar strength and the sentiment around emerging market currencies which have been trading relatively weaker against the greenback. The rand retreated to a session low of R15.35/$ earlier, before it rebounded to be recorded trading 0.31% weaker at R15.32/$ at 17.00 CAT. 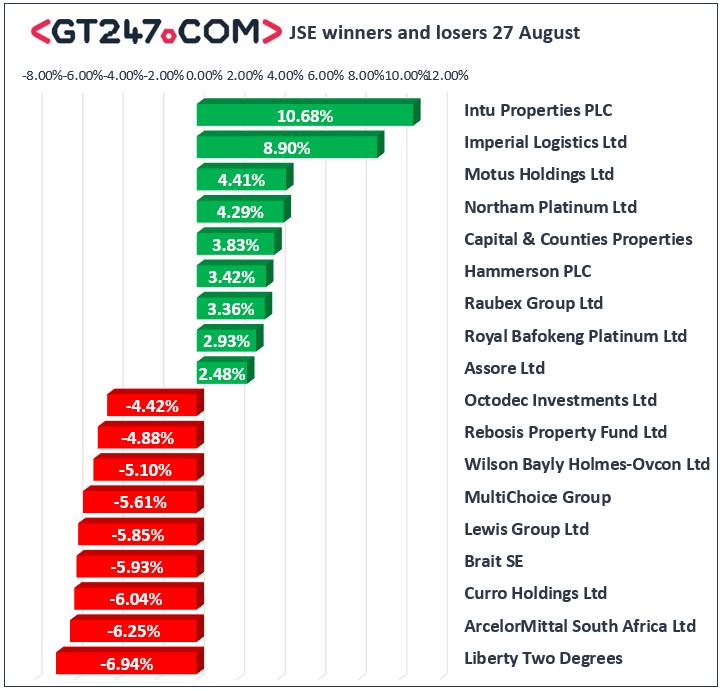 The JSE All-Share index eventually closed 0.09% firmer while the JSE Top-40 index gained 0.18%. The Financials index came under pressure as it closed 0.61% weaker. The Resources and Industrials indices managed to add 0.65% and 0.25% respectively.

With fears around the trade war bubbling down in today’s session, brent crude managed to find some momentum as it was recorded trading 0.96% firmer at $58.68/barrel just after the JSE close.