The JSE fell on Friday as it followed the trend in other global markets which resumed their slump led by tech stocks.

Amazon and Alphabet fell in after-market trading in the USA despite reporting good earnings in their results. The sell-off was triggered by growth forecast warnings from the two giants as their reported revenues missed analysts’ estimates. In Hong Kong, Tencent Holdings fell to a new 52-week low as Chinese regulators are looking to implement more stringent measures to verify the age of online game users.

The US dollar rallied in today’s session as the markets anticipated US GDP data. GDP QoQ for the 3rd quarter fell from a prior recording of 4.2% to 3.5%, however this was better than the consensus forecast of 3.3%. The stronger US dollar saw the rand retreat to a session low of R14.75 against the greenback. The rand rebounded marginally to trade at R14.64/$ at 17.00 CAT. 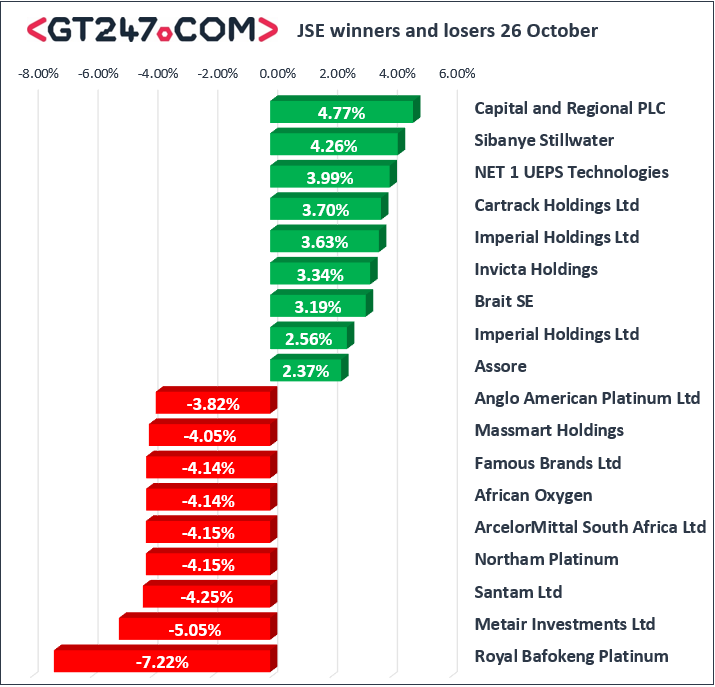 The JSE All-Share index closed the day 1.53% lower, while the JSE Top-40 index dropped 1.68%. The Financials index came under significant pressure as it fell by 1.82%, while the Industrials and Resources lost 1.67% and 1.27% respectively.

Brent crude was mostly softer as it slumped to a session low of $75.77/barrel, before it rebounded to trade at $76.63/barrel just after the JSE close.