The JSE fell on Tuesday as losses on the financials and resources indices deepened.

The fall on the local bourse was triggered by the fall in Asian markets which closed significantly weaker on Tuesday. The Nikkei dropped a modest 0.43% however the Shanghai Composite Index and Hang Seng fell 1.04% and 1.15% respectively. Losses were relatively modest in Europe while in the USA, equity futures tracked lower as the US 10-year Treasury yield fell below 2% yet again.

The US dollar traded mostly flat despite this decline in US Treasury yields. The rand recovered from its overnight lows as it peaked at a session high of R14.26/$ before it was recorded trading at R14.29/$ at 17.00 CAT, up 0.44% on the day. 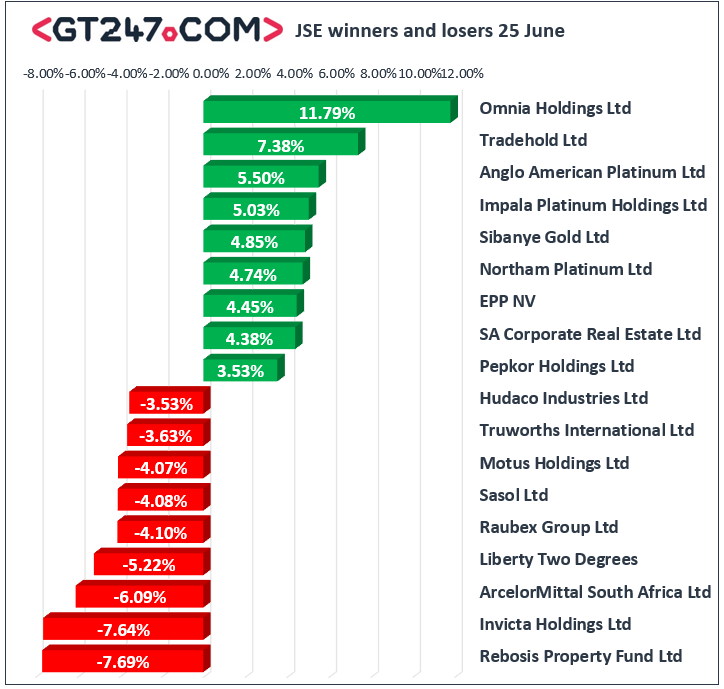 Omnia Holdings [JSE:OMN] rallied 11.79% to close at R38.39 despite reporting a decline in operating profit of 98% for the full-year ended 31 March, as investors focused on the measures the company is taking to secure its viability. Anglo American Platinum [JSE:AMS] surged 5.5% to close at R862.45 following the release of positive trading statement in which the company indicated that they are expecting an increase of at least  180% in basic earnings and earnings per share. Other platinum miners also rallied on the day with gains being recorded for Impala Platinum [JSE:IMP] which added 5.03% to close at R72.01, while Northam Platinum [JSE:NHM] gained 4.74% to close at R63.25.

The JSE All-Share index eventually closed 0.75% weaker while the JSE Top-40 index fell 0.91%. The Resources index only closed 0.06% firmer while the Industrials and Financials indices dropped 1.39% and 0.82% respectively.