The JSE erased earlier gains to close softer on Thursday as pressure mounted on European stocks.

The local bourse had managed to get off to a firmer start before the declines in Europe weighed in the afternoon session. The firmer open could be attributed to the gains recorded on the Shanghai Composite Index which rallied 2.3%, as well as the Nikkei which added 0.34%. The Hang Seng closed 0.17% softer. US stocks also opened marginally softer on Thursday which aided the maintaining the weaker market sentiment.

The greenback remained in favor with investors as it continued to soar against a basket of major currencies as well as emerging market currencies. The rand slipped by more than a percent to a session low of R15.14/$ before it was recorded trading 0.88% weaker at R15.10/$ at 17.00 CAT. 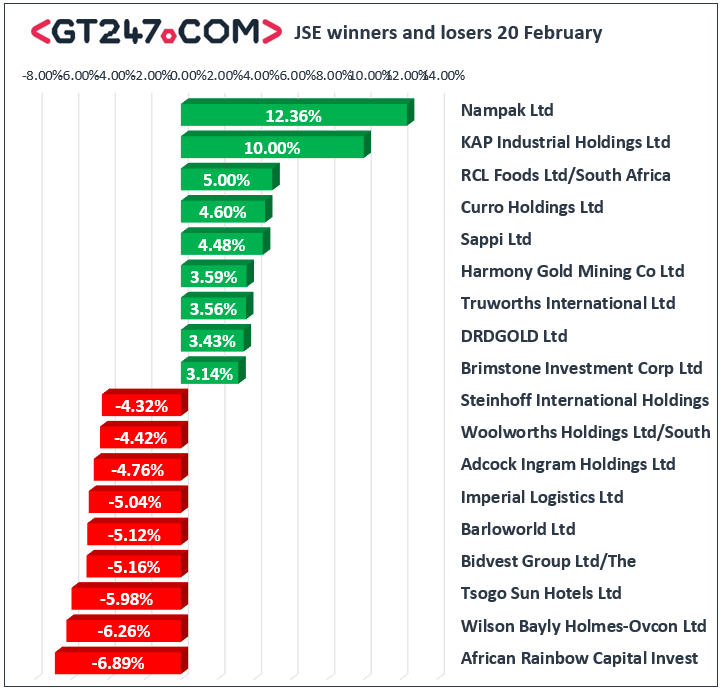 Nampak [JSE:NPK] closed amongst the day’s biggest gainers after it rallied 12.36% to close at R5.00, while KAP Industrial Holdings [JSE:KAP] managed to record gains after sessions of significant losses as it closed 10% higher at R3.52. Truworths [JSE:TRU] posted gains of 3.56% to close at R45.64 mainly attributable to the release of its half-year results. Diversified mining giant Anglo American PLC [JSE:AGL] released a solid set of full-year results which saw the share gain 2.49% to close at R414.79, while its sector peer BHP Group [JSE:BHP] added 0.95% to close at R317.19. Losses were also recorded for Mondi PLC [JSE:MNP] which added 1.74% to close at R329.00, as well as Sasol [JSE:SOL] which closed at R226.15 after gaining 1.41%.

The JSE Top-40 index eventually closed 0.13% softer while the broader JSE All-Share index shed 0.21%. The Resources index was the only major index to close firmer as it gained 0.82%, while the Industrials and Financials indices lost 0.23% and 1.73% respectively.

Brent crude continues to creep up and today it was recorded trading 0.63% firmer at $59.52/barrel just after the JSE close.