Local bourse ekes out gains at the close

The local bourse relinquished earlier gains before barely closing firmer on Thursday, on the back of heavier losses in European stocks.

European counters shrugged off earlier gains in Asia, as the losses deepened within an hour of markets opening in Europe. Chinese stocks maintained their upward momentum as they advanced 2.23%, while the Hang Seng surged 2.08%. The Nikkei gained 1.09%. Losses cross the major European benchmarks breached 2% on average while US counters also opened sharply in the red.

In terms of local economic data, the SACCI Business Confidence index for the month of February was recorded at 92.7, which is slightly better than the expected level of 92. The rand had another volatile session as it also relinquished earlier gains to fall to a session low of R15.55/$. The local unit was trading 1.8% weaker at R15.53/$ at 17.00 CAT. 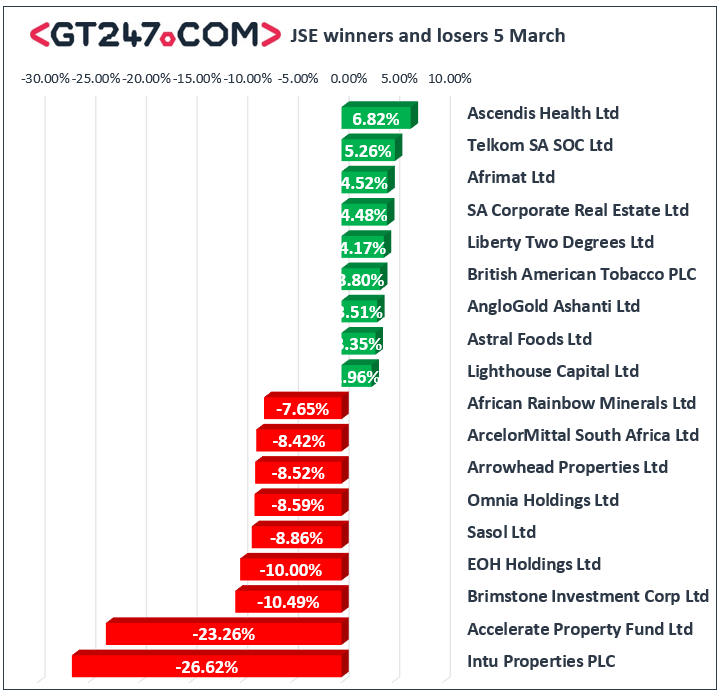 The JSE Top-40 index inched up 0.12% while the broader JSE All-Share index only closed 0.02% firmer. The Financials and Resources indices lost 0.99% and 0.8% respectively, however the Industrials index managed to surge 1.07%.

Brent crude retreated in today’s session as it was recorded 0.72% lower at $50.76/barrel just after the JSE close.