The JSE closed softer on Thursday on the back of weakness in financials and retailers after the rand fell against the greenback.

The rand weakened considerably against the US dollar overnight as it breached the R14/$ level. In today’s session it fell to a session low of R14.20/$ as the US dollar extended its gains earlier. The US dollar did retreat after the release of US retail sales data which came in worse than anticipated, but this did not result in significant strengthening for the rand and other emerging market currencies. The rand was trading 0.84% weaker at R14.18/$ at 17.00 CAT. 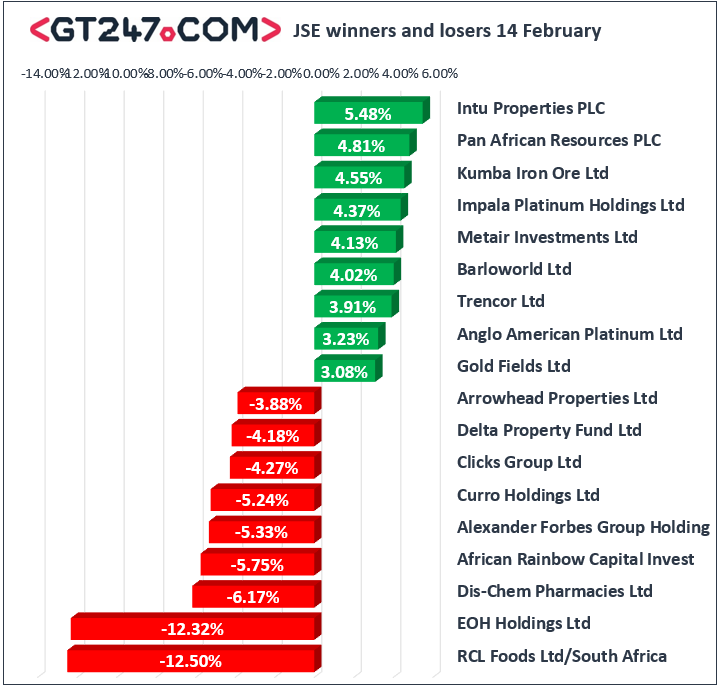 Of the day’s gainers, Barloworld [JSE:BAW] gained some momentum after the release of a positive operational update which saw the stock close 4.02% higher at R126.15. Platinum miners also advanced on the day which saw Impala Platinum advance 4.37% to close at R47.80, Anglo American Platinum [JSE:AMS] gained 3.23% to R660.20, and Sibanye Stillwater [JSE:SGL] posted gains of 1.6% to close at R14.65. South32 [JSE:S32] was buoyed by the release of its half-year results which indicated a healthy increase in earnings per share. The stock closed 2.41% firmer at R37.76.

The JSE All-Share index closed 0.03% softer while the JSE Top-40 index shed 0.08%. The Industrials and Resources indices managed gains of 0.39% and 0.62% respectively, however the Financials index retreated by 1.8%.

Crude oil prices eased in today’s session following consecutive sessions of significant gains. Brent crude was down 0.19% to trade at $63.49/barrel just after the JSE close.