The JSE closed weaker on Wednesday following a mixed trading session where the local bourse swung between gains or losses.

Global markets also traded mixed as investors tried to gauge Canada’s position in NAFTA following the deal signed between Mexico and the USA on Monday. In Asia, the Shanghai Composite Index closed 0.4% weaker however, the Nikkei and Hang Seng managed to gain 0.15% and 0.23% respectively.

The rand struggled against the US dollar as it weakened to a session low of R14.49/$. This was despite the US dollar trading mostly flat even as USA Q2 GDP numbers beat estimates. The rand recovered to trade at R14.40/$ at 17.00 CAT.

Steinhoff International [JSE:SNH] recorded the biggest jump of the day to close 25% higher at R2.75 per share. Adcock Ingram’s [JSE:AIP] full-year results showed a good improvement in the group’s profitability with HEPS rising by 26% compared to the previous period. Resultantly the stock gained 2.59% to close at R71.30 per share. 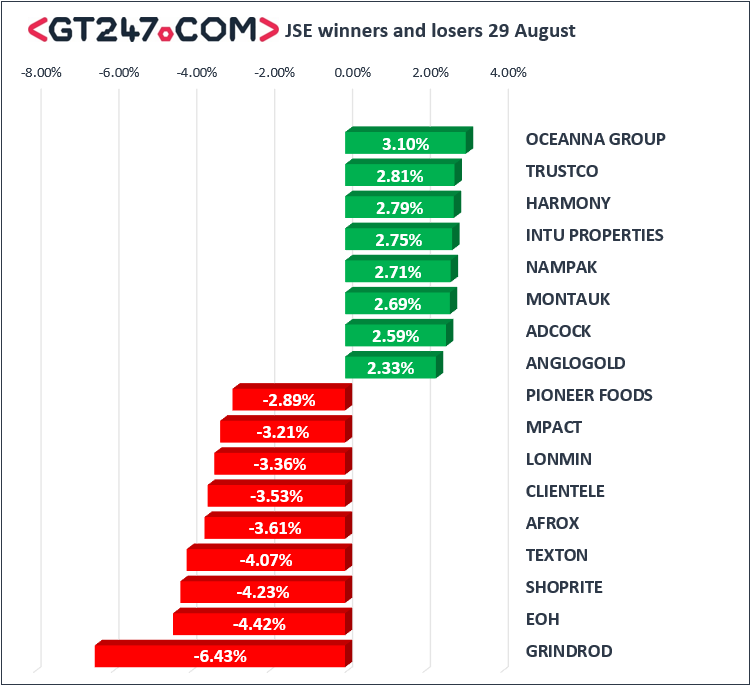 The local bourse gained some traction towards the close which saw the JSE All-Share index closing 0.21% higher, while the JSE Top-40 index managed to add 0.27%. The Financials index came under pressure because of the weaker rand to end the day 1.14% weaker. The Industrials and Resources indices gained 0.16% and 1.59% respectively.

Brent crude climbed following the release of US crude oil inventories data which showed a bigger draw than anticipated. The commodity jumped to a session high of $76.73/barrel before retracing to trade at $76.14/barrel just after the JSE close.