The JSE shrugged off the pessimism in other global indices as it surged higher on Monday.

Bearishness crept up in most global markets following the attack on a Saudi Arabian oil pipeline over the weekend which is estimated to affect at least 5% of global oil supply. In a world economic climate which is currently being shrouded by trade war concerns, this latest development saw investors shun riskier assets such as stocks on Monday.

In Asia, the Shanghai Composite Index and the Hang Seng fell 0.37% and 0.83% respectively, while the Nikkei was closed for a holiday. In Europe, equities tracked mostly lower while major US indices also opened softer.

Emerging market currencies fell put of favour as investors sort stronger currencies such as the greenback. The rand fell to a session low of R14.71/$ before it was recorded trading 0.18% weaker at R14.58/$ at 17.00 CAT. 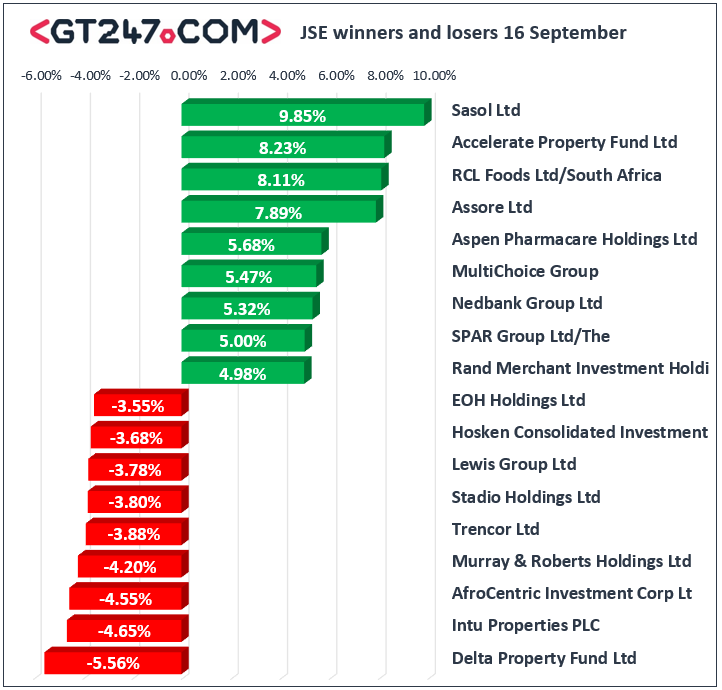 The JSE Top-40 index advanced 1.03% while the broader JSE All-Share index also gained 1.03%. All the major indices recorded gains on the day. The Financials index was the biggest gainer on the day after it rallied 2.8%, while the Industrials and Resources gained 0.64% and 0.52% respectively.

Brent crude surged by more than 20% when global markets opened on Monday as traders reacted to the attack on the Saudi pipeline. After having closed at $60.22/barrel on Friday, the commodity surged as much as $71.62/barrel before retreating to be recorded trading 11.53% higher at $67.22/barrel just after the JSE close.