The JSE barely closed firmer on Wednesday following another session in which the local index gave up earlier gains towards the close.

Stocks were mixed in Asia as losses were recorded for the Japanese Nikkei and the Shanghai Composite Index which shed 0.33% and 0.41% respectively, while the Hang Seng managed to add 0.08%. In Europe stocks traded mostly firmer despite gains being relatively modest. US markets opened significantly lower benchmark Treasury yields continued to fall, with the 30-year yield in particular dropping to an all-time low. This is characteristic of the current risk-off sentiment which has seen investors move in droves into safe-haven assets. 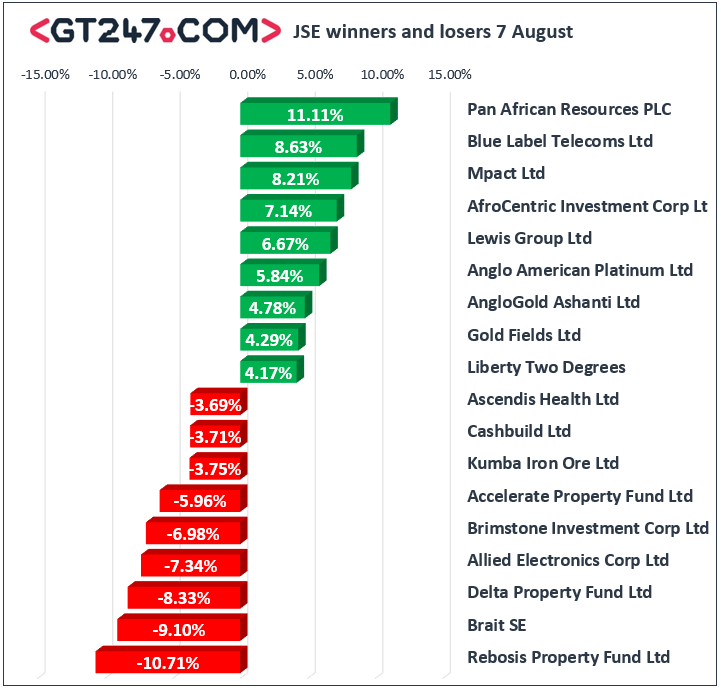 Of the day’s losers, Brait [JSE:BAT] lost further ground as it slipped 9.1% to close at R12.78. Kumba Iron Ore [JSE:KIO] weakened on the back of softer iron ore prices which saw the stock close at R409.64 after dropping 3.75%. Retailers took another tumble in today’s session as the rand weakened further. Shoprite [JSE:SHP] fell 2.87% to close at R153.45, Mr Price [JSE:MRP] lost 2.46% to close at R174.73, while Massmart [JSE:MSM] dropped 2.15% to close at R46.78. Glencore [JSE:GLN] fell following the release of its half-year report which highlighted significant profit decreases in its African copper and cobalt mines. The stock retreated 2.19% to close at R41.14.

The JSE All-Share index had a late save as it closed 0.15% firmer while the JSE Top-40 index added 0.13%. The Financials index was the only major index to close in the red as it lost 0.92%, while the Industrials and Resources indices managed to add 0.44% and 0.34% respectively.

Brent crude plunged further following the US crude inventories report which showed a significant rise in stockpiles. The commodity was trading 3.41% lower at $56.93/barrel just after the JSE close.