The JSE has traded mostly flat on Thursday as the industrials and resources indices pulled in opposite sides before a late rally saw it close firmer.

Global markets were digesting the Fed’s interest rate decision which was announced on Wednesday in which it cuts the benchmark rate by 25 basis points to 2%. Fed chairman, Jerome Powell reiterated that the central bank was not in an interest cutting cycle, which sent stocks into a spiral as investors had priced in significant monetary policy loosening. Focus now shifts to the US non-farm payrolls data which is expected to be released on Friday.

US markets tumbled following the Fed’s press conference overnight, and subsequently Asian markets also opened and traded mostly softer on Thursday. The Shanghai Composite Index lost 0.83% while the Hang Seng shed 0.76%. The Japanese Nikkei was marginally firmer as it inched up 0.09%.

On the currency market, the rand tumbled as the National Treasury announced an increase in the weekly bond issuance. With the situation at Eskom deteriorating further and increasing economic risks, the case for Moody’s to downgrade South Africa’s sovereign rating is possibly quite high. The local currency slipped to a session low of R14.56/$ before it was recorded trading 1.39% weaker at R14.53/$ at 17.00 CAT. 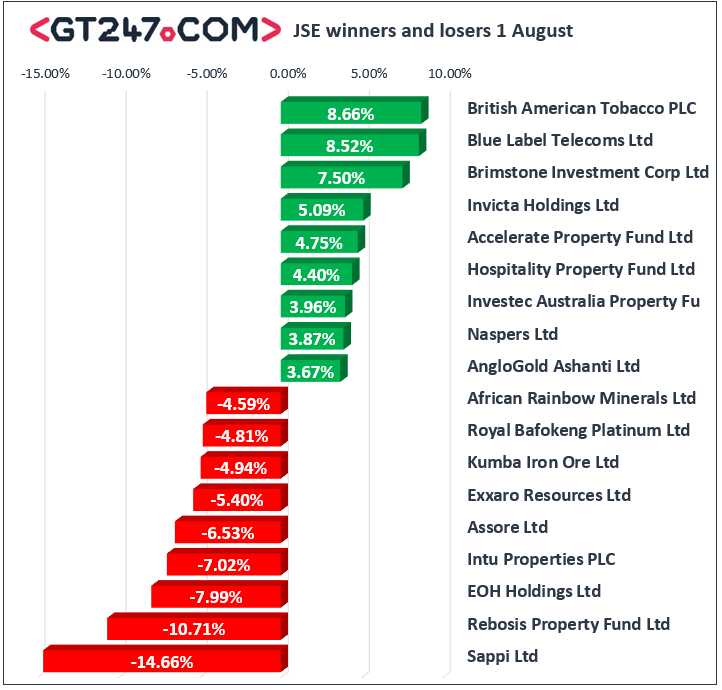 British American Tobacco [JSE:BTI] surged in today’s session following the release of the its half-year results which were mostly positive as the company recorded increases in revenue and earnings. The share eventually closed 8.66% higher at R556.79. Telecoms provider Blue Label Telecoms [JSE:BLU] climbed 8.52% to close at R3.95, while its sector peer Vodacom [JSE:VOD] managed to gain 1.04% to end the day at R118.88. Index heavyweight Naspers [JSE:NPN] helped lift the All-Share index towards the close as it closed 3.87% firmer at R3643.00, while another index large cap Richemont [JSE:CFR] rose 2.24% to close at R125.45. Other significant gainers on the day included AngloGold Ashanti [JSE:ANG] which gained 3.675 to close at R263.14, and Sasol [JSE:SOL] which rose 1.95% to close at R316.80.

The JSE All-Share index closed 0.77% higher while the JSE Top-40 index gained 1.05%. The Resources and Financials indices lost 1.48% and 0.175 respectively, however the Industrials surged to close 2.44% firmer.

Brent crude slipped from its overnight highs to trade 2.24% weaker at $63.62/barrel just after the JSE close.