JSE weaker as South Africa slips into a recession

The JSE fell on Tuesday after data released by Statistics SA showed that South Africa’s GDP contracted for a second consecutive quarter.

This contraction effectively puts South Africa in a recession for the first time since 2009. Q2 GDP annualized QoQ contracted for by 0.7% which was worse than the forecasted growth of 0.6%. The Q1 GDP numbers which were initially recorded at -2.2% were revised downwards to -2.6%.

The rand took the biggest knock on the day as it slumped by more than 3% to reach a session low of R15.37 against the greenback. This weakness was worsened by the US dollar which advanced against a basket of major currencies following the release of better than expected US economic data. The rand was down 2.53% to trade at R15.21/$ at 17.00 CAT.

MTN [JSE:MTN] tumbled in today’s session even after the company issued an announcement with regards to the letter that they received from the Central Bank of Nigeria. The stock nose-dived to a session low of R70.58 per share before it closed at R72.00 after dropping 17.05%. Aspen [JSE:APN] also struggled despite the release of a trading statement which indicated an improvement in the company’s earnings for the full-year ended June 2018. The share lost 7.49% to close at R270.86 per share. 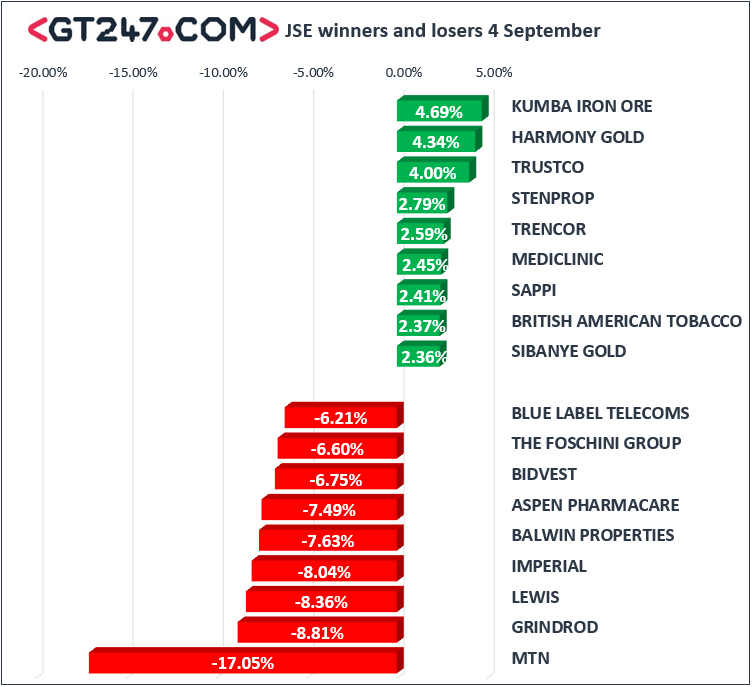 Resources were buoyed by the weaker rand, which translates to a higher rand-denominated metal price for the JSE listed miners. Kumba Iron Ore [JSE:KIO] rose by 4.69% to close at R289.10, while Harmony Gold [JSE:HAR] picked up 4.34% which saw the stock close at R24.98 per share. African Rainbow Minerals [JSE:ARM] managed to firm to R130.69 after adding 2.14%.

The JSE All-Share index eventually closed the day down 1.4%, while the JSE Top-40 index lost 1.42%. The Resources index was the only major index to record gains as it closed 0.55% higher. The Industrials and Financials indices lost 1.76% and 3.1% respectively.

Brent crude erased of its earlier gains to trade flat at $78.30/barrel just after the JSE close.