The JSE closed weaker on Monday mainly on the back of weakness recorded across most blue-chip stocks.

The local bourse failed to take a leaf from the firmer close recorded in Chinese equities which saw the Shanghai Composite Index close 0.28% firmer, while the Hang Seng rose 0.97%. Stocks in Japan struggled which saw the Nikkei closing 0.22% weaker. Stocks traded mostly flat in Europe as they struggled to find a catalyst for direction. In the USA, market participants are waiting for results from Google parent, Alphabet which is expected to release results after the US markets’ close on Monday.

On the currency market, the US dollar was mildly firmer against a basket of major currencies. The rand traded mostly firmer despite this US dollar strength as it peaked at a session high of R14.30/$. At 17.00 CAT, it was trading 0.48% firmer at R14.31/$. 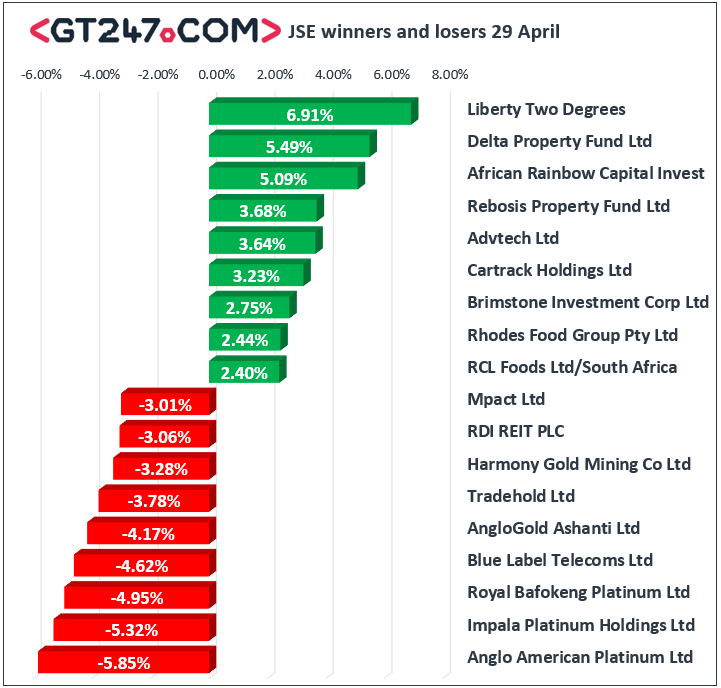 The JSE All-Share index eventually closed 0.54% weaker while the JSE Top-40 index lost 0.52%. The Financials index barely closed firmer as it added 0.08%, while the Industrials and Resources lost 0.28% and 0.83% respectively.

Brent crude retreated over the weekend as market participants fretted over Donald Trump’s calls for OPEC to take measures to reduce oil prices. The commodity was trading 0.085 firmer at $71.72/barrel just after the JSE close.

Any opinions, news, research, reports, analyses, prices, or other information contained within this research is provided by Musa Makoni, Trader at GT247 (Pty) Ltd t/a GT247.com (“GT247.com”) as general market commentary, and does not constitute investment advice for the purposes of the Financial Advisory and Intermediary Services Act, 2002. GT247.com does not warrant the correctness, accuracy, timeliness, reliability or completeness of any information which we receive from third party data providers. You must rely solely upon your own judgment in all aspects of your trading decisions and all trades are made at your own risk. GT247.com and any of its employees will not accept any liability for any direct or indirect loss or damage, including without limitation, any loss of profit, which may arise directly or indirectly from use of or reliance on the market commentary. The content contained within is subject to change at any time without notice.