The JSE closed weaker on Thursday on the back of broad-based weakness across most global equity indices.

Initial weakness was recorded in mainland China were the Shanghai Composite Index fell 2.19% while in Hong Kong the Hang Seng dropped 0.86%. The Japanese Nikkei managed to eke out gains of 0.48%. All the major indices in Europe traded mostly weaker while in the USA the Nasdaq futures tried to buck the trend to trade mostly flat to firmer on the day.

The US dollar remains bullish as it has managed to retest its 4-month highs. This is bad news for emerging market currencies such as the rand which slipped further against the greenback in today’s session. The rand fell to a session low of R14.55/$ before it retraced to trade 0.26% weaker at R14.45/$ at 17.00 CAT. 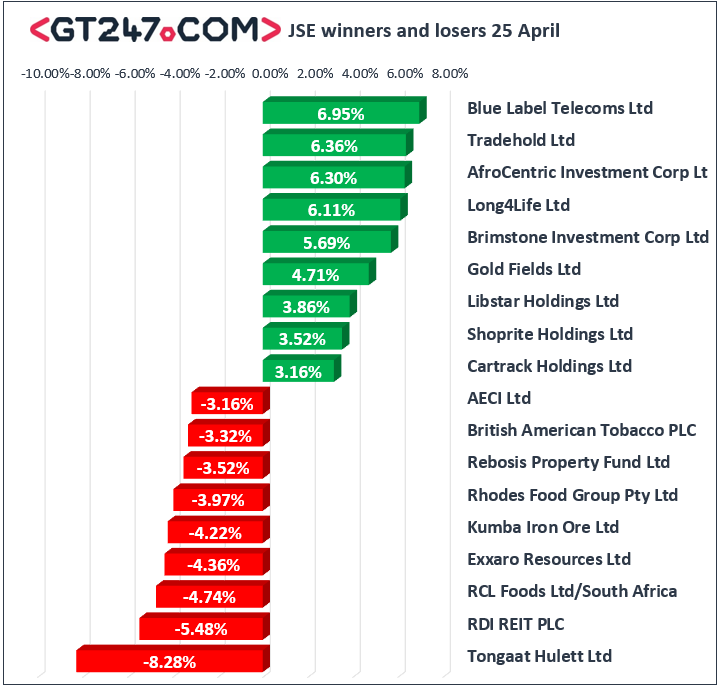 On the JSE, Kumba Iron Ore [JSE:KIO] came under significant pressure following the release of its production and sales update. The stock fell 4.22% to close at R433.18. Tongaat Hulett [JSE:TON] was one of the day’s biggest losers after the stock lost 8.28% to close at R20.82, while RDI REIT [JSE:RPL] was not far off behind as it fell 5.48% to close at R23.63. Coal miner Exxaro Resources [JSE:EXX] weakened by 4.36% as it closed at R164.50, while Anglo American PLC [JSE:AGL] was weighed down by the release of a weaker production update which saw the stock close 2.1% lower at R379.80. British American Tobacco [JSE:BTI] was the casualty of the contagion that was a result of weaker earnings released by tobacco producer Altria. The stock fell 3.32% to close at R551.07.

Blue Label Telecoms [JSE:BLU] recorded another session of gains as it climbed 6.955 to end the day at R4.77. Long4Life [JSE:L4L] was buoyed by the release of a positive trading update which saw the stock rise 6.11% to close at R4.86. Gold miners were positive on the day with stocks such as Harmony Gold [JSE:HAR] gaining 2.8% to close at R26.08, while Gold Fields [JSE:GFI] picked up 4.71% as it closed at R54.91. Lonmin [JSE:LON] advanced after news broke out that more favorable terms have been reached with regards to its proposed acquisition by Sibanye Stillwater [JSE:SGL]. Lonmin eventually closed 2.58% firmer at R13.89.

The JSE Top-40 index eventually closed 0.6% weaker while the broader JSE All-Share index lost 0.5%. Financials fell short of closing positive as they dropped 0.02%, while the Industrials and Resources indices lost 0.75% and 0.56% respectively.