The local bourse closed softer on Thursday as market participants reacted to a flurry of earnings releases from JSE listed companies.

Investors were also tentative across the globe as investors paid close attention to the talks between the USA and North Korea, which abruptly ended after the two sides failed to agree on key issues in the discussions. Locally, Statistics SA released South Africa’s January’s PPI data which came in better than expected. PPI YoY slowed down to 4.1% from a prior recording of 5.2%, while PPI MoM was recorded at -0.8% which was better than the forecasted 0.1%.

The rand did not benefit from this as it was weighed down by the positive sentiment surrounding the US dollar due to US GDP data which was released this afternoon. Today’s US GDP data release was delayed by 28 days due to the US government shutdown last month. US GDP QoQ was recorded at 2.6% which beat the estimated level of 2.2%. The rand fell to a session low of R14.01/$ before it was recorded at R13.99/$ at 17.00 CAT.

On the JSE, Blue Label Telecoms [JSE:BLU] slumped by 25.49% to close at R4.56 following the release of its half-year results, which indicated a headline loss per share which was attributed to the dilution of shares to facilitate part-payment for Cell C and 3G Mobile. Massmart’s [JSE:MSM] full-year results were also not impressive as the company reported a decrease of 91.3% in trading profit. The stock eventually closed 6.43% lower at R87.11. Imperial Logistics [JSE:IPL] reported a decent set of results but it flagged that the difficult operating environment in South Africa would continue to impact its profitability. As a result, the stock fell 9.99% to close at R64.43. Despite reporting an increase of 23% in basic earnings per share in its full-year results, Mondi Ltd [JSE:MND] fell 4.58% to close at R333.16 as it flagged a gloomy outlook for its operations. With regulatory risks hanging over its head, British American Tobacco [JSE:BTI] dropped 1.59% to close at R511.81 despite reporting a relatively good set of full-year results. 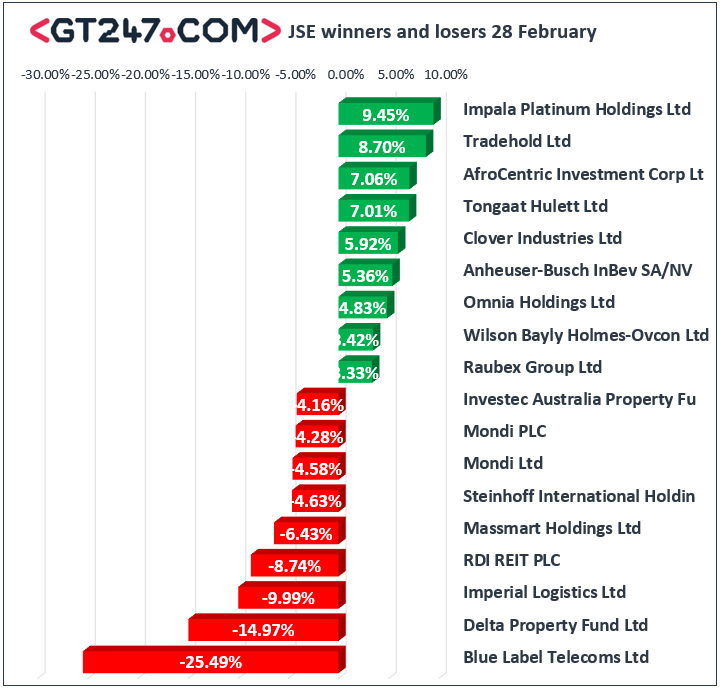 The JSE All-Share index eventually closed 0.53% weaker while the JSE Top-40 index dropped 0.58%. All the major indices closed in the red with the biggest loser being the Resources index which dropped 1.71%. The Financials and Industrials indices lost 0.42% and 0.06% respectively.

Brent crude retreated on the day and it was trading 0.48% weaker at $66.07/barrel just after the JSE close.