The local bourse retreated on Wednesday mainly on the back of broad-based weakness across most major global indices.

Although modest, most of the major Asian indices recorded declines on Wednesday. In Japan the Nikkei dropped 0.31%, in Hong Kong the Hang Seng closed 0.09% lower while in China the Shanghai Composite Index lost 0.06%. US equity futures traded mostly weaker which saw the spot market also open weaker despite solid earnings results from Bank of America.

Locally, Statistics SA released South Africa’s retail sales data for the month of May. Retail Sales YoY came in better than expected at 2.2% which was better than the forecasted 1.6%, while retail sales MoM only advanced 0.1% which was worse than the prior recording of 1%. Investors now shift their attention to the South African Reserve Bank’s interest rate decision which is expected at 15.00 CAT on Thursday. The central bank is widely expected to loosen monetary policy by cutting the repo rate by 25 basis points to 6.50%. 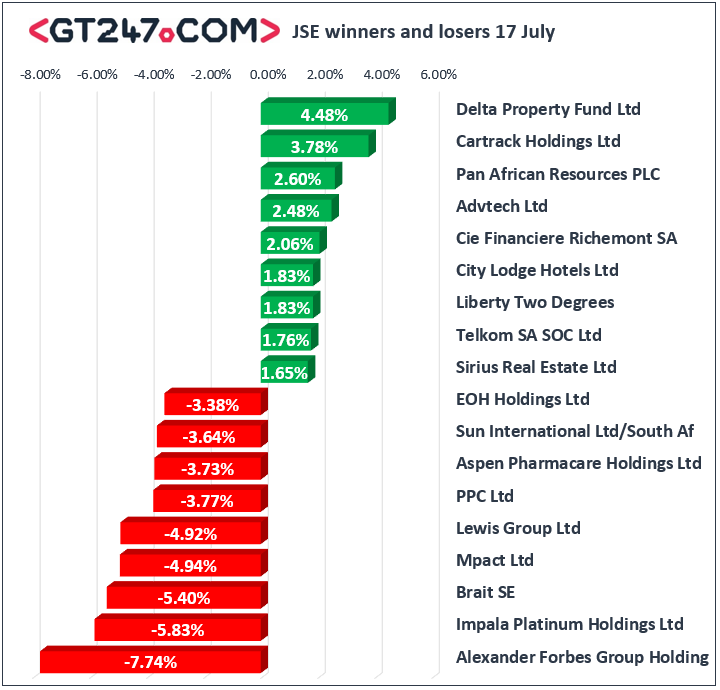 Luxury goods retailer Richemont [JSE:CFR] climbed 2.06% to end the day at R120.46 to end as one of the day’s biggest gainers. Listed property stocks had a small reprieve which saw MAS Real Estate [JSE:MSP] gain 1.35% to close at R20.20, while Intu Properties [JSE:ITU] added 1.59% to close at R13.45. BHP Group [JSE:BHP] managed to post gains of 0.66% to close at R352.69 following the release of an operational update which showed that production was mostly within the company’s guidance. Telecoms provider Telkom [JSE:TKG] rose 1.76% to close at R90.17, while sector peer Blue Label Telecoms [JSE:BLU] gained 1.59% to close at R3.84.

The JSE All-Share index closed 0.83% lower while the blue-chip JSE Top-40 index dropped 0.76%. In a complete turnaround from the prior session, all the major indices retreated today. Industrials lost 0.8%, Resources dropped 0.19% and Financials weakened by 1.74%.

Brent crude was trading mostly flat on the day, and it was recorded trading 0.14% firmer at $64.44/barrel just after the JSE close