The local bourse lost ground towards the close on Wednesday eventually erasing all its earlier gains.

Stocks were much more stable in today’s session following a sharp sell-off which engulfed most global markets on Tuesday. The JSE had some momentum at the open following firmer closes for the main Asian equity indexes. However, most of that momentum faded as the day went on as European equities struggled. US equity futures pointed higher on the back of positive sentiment from giants such as IBM and Netflix.

Statistics SA released inflation data for the month of December which came in slightly higher than forecasted. CPI YoY was recorded at 4.0% from a prior recording of 3.6%m while CPI MoM rose 0.3% from a prior recording of 0.1%. This comes on the back of the interest rate cut by the South African Reserve Bank at last week’s MPC meeting. The rand advanced primarily due to the weaker US dollar which saw the local currency peak at a session high of R14.37/$ before it was recorded trading 0.72% firmer at R14.38/$. 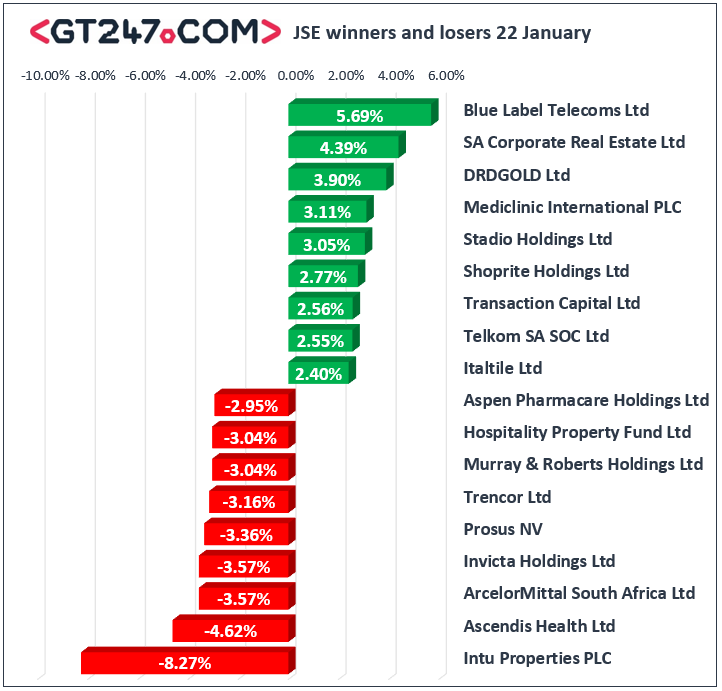 The JSE All-Share index eventually closed 0.1% softer while the JSE Top-40 index closed 0.05% weaker. The Resources index managed to eke out gains of 0.08%, while the Industrials and Financials lost 0.11% and 0.12% respectively.

Brent crude was trading mostly weaker on the day and it was recorded trading 1.95% weaker at $63.34/barrel just after the JSE close.