The JSE traded firmer on Wednesday shaking off some of the losses sustained on Tuesday as international markets rallied on the back of stronger earnings numbers from Dow Jones industrial heavyweights.

Strong earnings reported out of Mediclinic [JSE:MEI] today pushed the local bourse higher as the diversified hospital group chalked up gains of 7.42% to close the day at 11470c. The hospital group has been under pressure since the reverse takeover of the then London Stock Exchange (LSE) listed Al Noor Hospitals.  Regulatory uncertainty in the United Arab Emirates(UAE), saw the groups share price decline by over 54% from its listing price, putting in a low in March of 2018.

Rand hedges Reinet [JSE:RNI] and British American Tobacco [JSE:BTI] eased by 2.95% and 1.38% respectively. INTU [JSE:ITU]  properties eased 8.27% today after the REIT announced that the much talked about corporate action with Hammerson (JSE:HMN) was put on ice, Hammerson gained 2.61% on the back of the announcement to trade at 8698c. Other locally listed REITS were not spared on the day as Rebosis [JSE:REB], Echo Polska [JSE:EPP]  and Liberty Two Degree [JSE:L2D]  eased 7.8%,4.58% and 3.73% respectively.

Retail sales figures continue to surprise to the upside as Year on Year (YOY) data showed that sales increased by 4.9% up from last month’s mark of 3.3%. The stronger retail numbers gave the local retailers some short term relief as The Foschini Group [JSE:TFG], Truworths [JSE:TRU] and Woolworths JSE: [WHL] chalked up gains of 1.99%, 1.77% and 1.63% respectively. Steinhoff International [JSE:SNH] continued to make progress as the embattled furniture retailer rallied 5.15% to close at R2.45 per share. 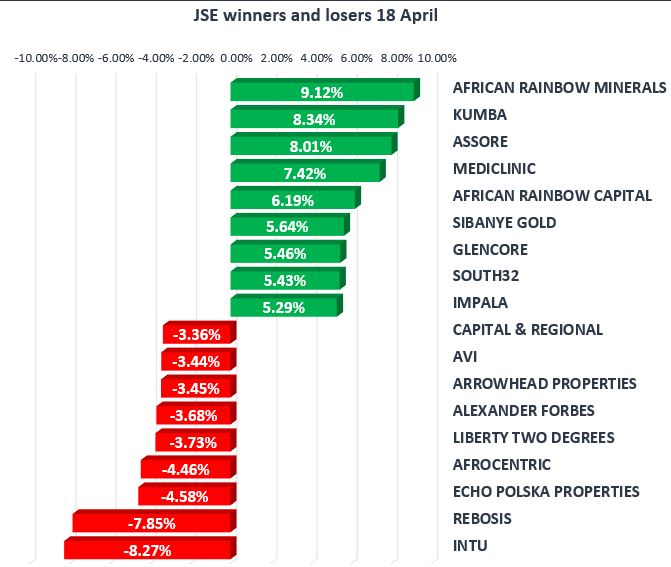 The JSE Top-40 Index eventually closed up 1.69% whilst the broader JSE All-Share Index gained 1.56%. The Resource index rallied 3.39%, whilst the Industrial and Financial Indices inched up 0.91% and 1.17% respectively.

The Rand traded firmer against the greenback to peak at a session high of R11.92/$. The local unit rallied on the back of stronger inflation figures released by STATS SA today. The government agency stated that YOY inflation had increased by 3.8%, which was lower than the market forecast of 4.1%. At 17.00 CAT, the Rand was trading at R11.92/$.

Gold was firmer on the day as the precious yellow metal continues to find direction. Recent geopolitical concerns have seen the precious metal rally, however any hint of normalcy returning have seen gold losing ground at rapid pace. The precious metal made a session low of $1342/Oz before rebounding to trade at $1351.8/Oz at 17.00 CAT. This US dollar was on the backfoot against most major currencies today trading at a session low of 89.45

The PGMs continued their rally today, as platinum traded firmer in line with gold reaching a high of $949.2/Oz, to trade at $947/Oz at the time of writing. Palladium followed suite as the metal rallied to stay above the psychological $1000/Oz mark, to trade at $1040/Oz at 17:00hrs CAT.

At the time of writing, Brent Crude was changing hands at $72 after the weekly crude inventory numbers reflected a draw of 1.07m barrels.