The local bourse reversed losses towards the close to end the day firmer following a session where it traded mostly softer.

Global stocks resumed their downtrend on Thursday on the back of an increasing number of detections of the coronavirus in different countries. Concerns over the spread of the virus have seen many commercial airlines suspending flights to China, and health officials across the globe including the World Health Organization are on high alert. Declines started off in Asia where the Nikkei fell 1.72%, while in Hong Kong the Hang Seng fell 2.62%. Weakness was recorded across all the major indices in Europe as well as the USA where equity futures traded in the red. US equity markets shrugged slightly better than expected GDP numbers to remain trading softer on the day.

In terms of local economic data, Statistics SA released producer inflation numbers for the month of December which showed that inflation picked up during the period. PPI YoY advanced 3.4% from a prior recording of 2.3%, while PPI MoM rose 0.2% from a prior recording of -0.3%. The rand slipped against the greenback to a session low of R14.77/$ as investors dumped emerging market currencies. At 17.00 CAT, the rand was trading 0.78% weaker at R14.74/$. 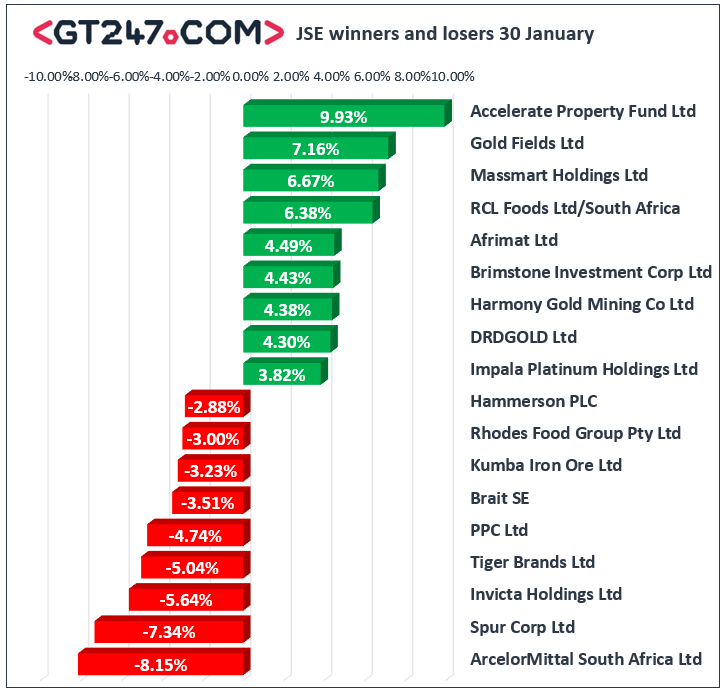 Massmart [JSE:MSM] was buoyed by the release of its plans to reorganize its operating model, which were released simultaneously with its trading and sales update . Despite weaker sales and revenue reported in the sales update, the stock surged 6.44% to close at R53.75. Gold miners rebounded in today’s session which saw gains being recorded for Gold Fields [JSE:GFI] which advanced 7.16% to close at R95.28, as well as DRD Gold [JSE:DRD] which released a positive half-year trading statement which resulted in the stock rising 4.3% to close at R9.22. Pan African Resources [JSE:PAN] gained 3.11% to close at R2.32, while Reinet Investments [JSE:RNI] closed at R323.46 after adding 1.88%. Gains were also recorded for Aspen Pharmacare [JSE:APN] which gained 1.87% to close at R117.14, and The Foschini Group [JSE:TFG] which rose 1.45% to close at R146.46.

The JSE All-Share index eventually closed 0.39% firmer while the JSE Top-40 index rose 0.42%. The Industrials index closed marginally softer as it only lost 0.03%. The Resources and Financials indices gained 1.05% and 0.36% respectively.

The pressure on brent crude persisted as the commodity was recorded trading 2% weaker at $57.73/barrel just after the JSE close.